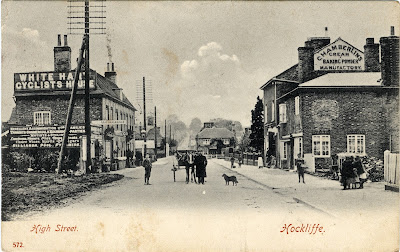 Thursday 4th May 1916: Private W. Horley, a bomb thrower in the 8th Battalion Bedfordshire Regiment, is home convalescent. His is another hair-raising story resultant from the attack on the battalion on 19th April. He was in the trenches at Ypres when his trench was bombarded by the Germans and nearly demolished, a dug-out was shattered and several of his mates were buried. Horley, with others, removed the debris with their hands and got them out. One of them, a sergeant, was badly hurt, and as it was cold, Horley returned to the ruins to fetch his overcoat. At that moment a shell came over and finished the destruction of the dug-out and he was buried, pinned by the legs and wounded in the neck by shrapnel. The Germans took the trench and held it for two days, until it was retaken by then Bedfordshire Regiment and Shropshire Light Infantry. He endured this tomb for seven days when he was fortunate enough to attract the attention of a sergeant of the Buffs(1), who had him released. He was removed to the base hospital in a very exhausted condition and from thence brought to Saint John’s Wood Hospital, where he remained for four weeks. He is at home at Hockliffe on ten days’ leave and will then return to his regiment, with the hope of “getting his own back”. His confinement was really his salvation. Had he been in the trench when it fell he would have shared the fate of his comrades, who were either killed or taken prisoners

(1) East Kent Regiment, 1st Battalion was in the same brigade as 8th Bedfords.
Posted by Martin at 07:00