The Bedfords: World War I

The Bedfordshire Regiment in World War One 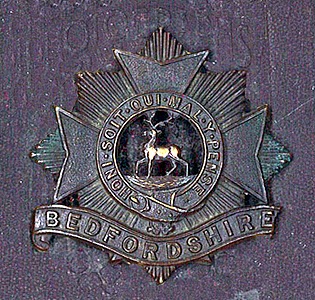 An Infantry Regiment was, at the start of the war, divided into three battalions, two of them active service units and the other (3rd Battalion) a depot battalion, used to train new recruits which then moved on to one of the other two battalions for active service.

Territorial Army battalions were first formed in 1908 and were made up of part-time personnel (referred to, rather scornfully, as Saturday afternoon soldiers) and were intended for home defence. They made up the 5th Battalion of a regiment. On the outbreak of war men with these battalions were asked whether they were prepared to serve overseas on active duty. Those who agreed became part of 1st/5th Battalion. In the Bedfordshire Regiment those who did not agree and would only serve at home were moved to 2nd/5th Battalion. In larger regiments this 2nd /5th Battalion was often also an active service unit. The Bedfordshire Regiment formed a further home service battalion, 3rd/5th during the war. In many regiments the 4th Battalion was also either a depot battalion or a territorial battalion but in Bedfordshire it was an Extra Reserve Battalion, being made up of men from the former militia. It, too, served overseas.

Infantry battalions of the same regiment rarely served in the same brigade [see below] except where that regiment had a large number of battalions – such as the King’s (Liverpool) or the London Regiment. The army tried, wherever possible, to avoid the practice as large casualties for a particular brigade would thus be felt very significantly in one small geographical area rather than sharing the burden. Each battalion had a headquarters, nominally of 99 men and four companies (A-D) each, nominally of 227 men, making a battalion at full strength 1,007 men. In the field battalions were usually much below this figure due to casualties, illness and men being away on courses and fatigue duty such as bridge guarding or assisting Royal Engineers. Each battalion was divided into four platoons each of four sections, making sixteen platoons in a battalion and sixty four sections. A Battalion was usually commanded by a colonel or lieutenant-colonel.

The battalions of the Bedfordshire Regiment were as follows, those in bold type being units which saw active service:
Four infantry battalions were amalgamated to form a brigade, usually of different regiments, for example, 54th Infantry Brigade comprised 7th Battalion, Bedfordshire Regiment, 11th Battalion, Royal Fusiliers, 6th Battalion, Northamptonshire Regiment and 12th Battalion Middlesex Regiment. Thus a brigade was, in theory about 4,000 men. A brigade was commanded by a Brigadier-General. Sometimes battalions were moved into or out of a brigade but in general the organisation remained remarkably stable throughout the war until the Spring of 1918 when a combination of losses and the government’s refusal to send large number of recruits from home resulted in one battalion in every four being disbanded and a brigade reduced to three battalions. In the case of 54th Brigade 12th Middlesex and 7th  were disbanded, though the 7th  were replaced by 2nd .

Three brigades formed a division, which also had a pioneer battalion for digging and other manual labour, but which could also fight as well as artillery, machine gun, medical and other support units. The combat total was, nominally, around 12,000 men. A division was commanded by a Major general. Sometimes brigades were moved from one division to another but generally they remained stable, in the same way as the composition of a brigade. Some divisions earned a reputation as elite formations, such as Guards Division, 7th Division and 18th (Eastern) Division, whilst others such as 46th () Division found a poor reputation hard to shake. They were held to have failed badly on the first day of the  of the . However, they redeemed themselves in 1918 by their spectacular piercing of the Hindenburg Line.

From two to five divisions were formed into a corps. This was never a static formation and had divisions moving in an out on a regular basis as tired divisions were rotated with fresh ones during battles. A corps was commanded by a Lieutenant General. In 1914 the British Army on the western Front was divided into just two corps. By the Armistice there were eighteen British corps in  and  in addition to others in ,  and . There was also a Canadian Corps and an Australian-New Zealand (ANZAC) Corps on the Western Front.

These corps were divided into a number of armies, two to six per army. The original British Expeditionary Force of 1914 formed one army. This became two armies in December 1914 and three in July 1915. A fourth army was created in February 1916. A Reserve Army was created in May 1916 and later renamed 5th Army. An army was commanded by a General.

The active service units of the Bedfordshire Regiment were divided into the following formations: