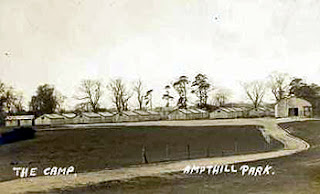 Saturday 20th November 1915: To accommodate the recruits who have joined during the present month two large structures have been provided at Ampthill Park. The Wesleyan Church Council of Ampthill have most patriotically placed the large room of their Institute at the disposal of the Commanding Officer of the Training Depot for the accommodation of some of the men, and His Grace has gratefully accepted their kind offer. A similar offer was made by the Committee of the English Church Schools, but unfortunately it was found that the proffered accommodation was not quite suited to the purpose.

On Wednesday a visit was paid to Ampthill Camp by a number of staff officers of the 59th (North Midland) Division(1), who were anxious to see the various facilities for training that exist at the Depot. The squads under instruction at Machine Gun Drill (Maxim and Colt) were first inspected. Then the two rifles fitted with telescopic sights (the Aldis Telescope and the Gibbs Magnifier) were examined and aroused much interest, especially the latter, which, at a third the cost of the Aldis Telescope, appears to have equally satisfactory results. The staff officers next witnessed recruits at drill and physical training and then passed on to the Miniature Range, the Rapid Loading and Firing Trench and the Obstacle Course. Meanwhile the Signallers under instruction had been engaged in laying telephone wire with Buzzer instruments from the Orderly Room to the Entrenching Ground, a mile distant, whither the party now made their way. A Relief Party was in readiness of the Woburn road and directly the officers reached the ground, the relief of the trenches was carried out. The various kinds of entrenchments, as well as the loopholed parapet and entanglements were visited in turn, great interest being taken in the method used for extending the trenches by sapping. Several of the staff officers had lately been in the trenches at the front, and it was satisfactory to hear them say that, not only were the entrenchments thoroughly up to date in every respect, but in the matter of construction they were far superior to any trenches at the front.


(1) 59th (2nd North Midland) Division was a formation of Territorial Army units of the North Staffordshire Regiment, Leicestershire Regiment and Sherwood Foresters. It was sent to Ireland to quell the Troubles in 1916 and in February 1917 was sent to France.
Posted by Martin at 07:00