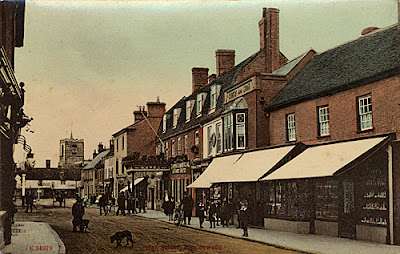 Wednesday 12th April 1916: Private Albert Bygraves, formerly machine gunner in the 2nd Bedfords, who was wounded at Ypres and is now in the Balkans(1) writes home to his mother at Langford. “I joined this regiment in November 1915 and we were called upon to relieve a regiment at a position 3,500 feet above sea level. We endured terrible hardships owing to the intense cold and lost a great number of men through frostbite. In December we were attacked by the Bulgars and owing to their overwhelming numbers had to retire after inflicting heavy losses on them(2). Our machine gun, which I was serving, played an active part in checking the enemy. Our casualties were two men and our Machine Gun Officer, whom we all adored. After expending all our ammunition we were successful in getting our gun and tripod out of action(3). We endured some strenuous marching and hardships. We were glad to get water from pools on the march as drinking water was not available. I must say myself and Privates J. Dennis and H. Day have undergone some terrible struggles between life and death during this campaign. It would be a lesson to those who have not taken part in the great struggle to see how we British boys endure hardships without complaining. We are always laughing and joking, no matter under what circumstances we are placed. The sooner all available young men come along and help us the quicker the end of this crisis will come”(4)

(1) Three British divisions were stationed in the Balkans, no battalion of the Bedfordshire Regiment served on the front where disease was rife.
(2) The Battle of Kosturino, in Serbia, from  6th to 12th December 1916 where the Bulgarian 2nd Army attacked the 10th (Irish) Division. The Irish lost 1,500 men and 8 guns and retreated into Greece.
(3) the Vickers 0.303 machine gun was on top of a tripod
(4) The Register of Absent Voters for 1918 tells us that Albert John Byrgaves, of Langford Road, Biggleswade, was a private in 5th Battalion, Royal Irish Fusiliers, part of 29th Brigade of 10th Division.
Posted by Martin at 07:00