Missing in Action and a Suicide 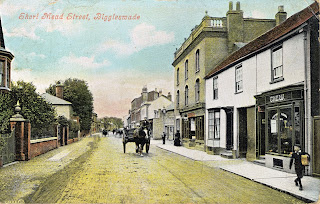 Easter Sunday 23rd April 1916: Mr and Mrs George Cartwright Wells of West’s Yard, Shortmead Street, Biggleswade, have received notification from the Records Office, Warley that their two sons Private Howard A C Wells and Private Frederick C Wells, of the 8th Bedfordshire Regiment, had been reported as missing, place not stated. A comrade, who also hails from Biggleswade, wrote home saying they were missing(1). The brothers Wells are widely known in the Biggleswade district and their many friends hope that their worst fears will not be realised The younger brother, Fred, was formerly in the employ of William Jackson(2) and came home a few weeks ago on leave. The elder brother has been gassed since being at the front. He was formerly engaged on the golf links, was a keen angler and figures on the Cricket Club’s Roll of Honour. The brothers enlisted together in the 8th Beds and after training at Shoreham etc they went to the Continent together and fought at Loos. Much sympathy is felt for the parents and brothers and sisters(3).

On this Easter Sunday we pray that God’s mercy may extend to a wretched suicide. Private Bruce Standley Moseley of 10th Battalion, a conscript and single man from Norfolk hanged himself at Dovercourt yesterday leaving a letter asking people to forgive him for his sins and advising others not to be misled(4).

(1) No doubt in the disaster of 19th April,
(2) A saddler in Shortmead Street
(3) Fortunately both men were prisoners and survived the war.
(4) He is buried in Dovercourt churchyard.