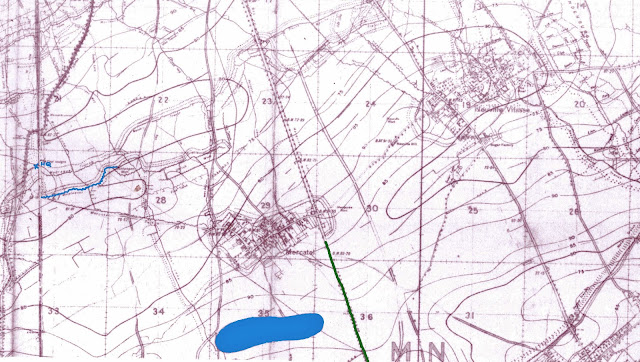 Monday 19th March 1917 from our correspondent in the field

The 2nd Battalion near Agny south-west of Arras advanced yesterday into trenches vacated by the enemy. Last evening they were ordered to see if the village of Mercatel was occupied, which it was. Patrols were again pushed into the village about 9 pm last night and found that the enemy patrols had withdrawn and that the enemy were now shelling the village. 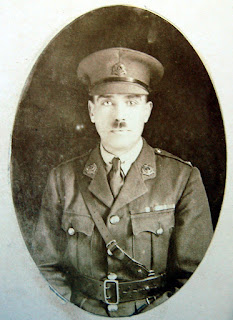 So far Mercatel and the high ground beyond had been taken by patrols. It was now time for a major advance. At 7.30 am orders were received for an advance on Mercatel in conjunction with 2/10th Battalion, London Regiment on our right and the 20th Battalion, King’s (Liverpool) Regiment on the left.

The Battalion was formed up ready for the attack, C and D Companies forming the attacking waves, A Company in support, and B Company in reserve in Malplaquet Trench and headquarters near the railway and le Chat Maigre (both also shown in blue).

The advance did not take place until 10.30, as the 2/10th London Regiment did not come up until then. Mercatel was reached without opposition and a little shelling. About 12 noon the leading Companies got as far as the high ground previously occupied by Second Lieutenant Aldridge and dug in here, as the Londoners had not come up on the right.

At 3.30 pm orders were given for C and D Companies to push on and dig in along their objective on the Beaurains to Boyelle Road which they did under considerable shell fire, as they were digging in full view of the enemy who were in Neuville Vitasse and the ridge south-east of it. On seeing our men advancing the 2/10th London Regiment advanced shortly after and joined up on the right along the Road. Touch was also at once gained with the 20th King’s (Liverpool) Regiment along the road on the left (shown in green on the map). This formed the main position and small posts were pushed out about 150 yards in front of it, forming an outpost line. By dusk the men were well dug in.