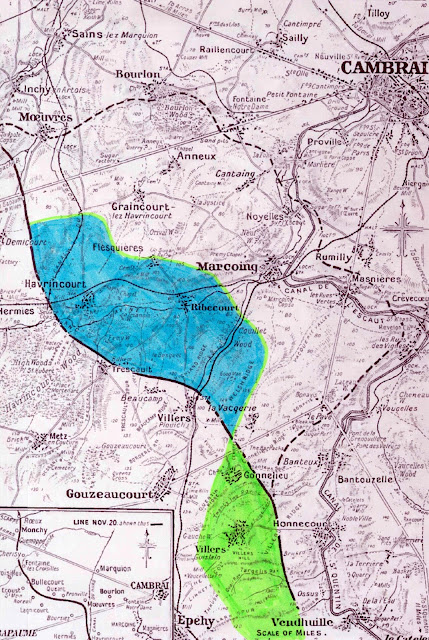 After writing the piece yesterday it occurred to your correspondent that this battle has been particularly complicated, with the initial British advance followed by the subsequent German counter-attack. I have, thus, endeavoured to obtain the final positions, now that the German attack seems to have ended, and to compare them with the way things were before 20th November. The map above is my attempt to do this, so far as it is in my power. The original British line is in black and today’s line in green, with enemy-gained ground coloured green and additional ground now held by our troops coloured blue. It will thus become apparent that, though some ground was yielded to the south, the army has gained important ground in the northern sector of the battlefield, pushing it closer to Cambrai. The dotted line shows the greatest extent of our advance.


As far as casualties are concerned things are, as ever, more difficult to gauge. Having pooled our collective knowledge the gentlemen of the Press Corps reckon that our forces have lost something under 50,000 men. Given the determination of the German counter-attack, and the fierce fighting around Bourlon Wood it is reckoned that German losses cannot be any less than ours.
Posted by Martin at 19:00