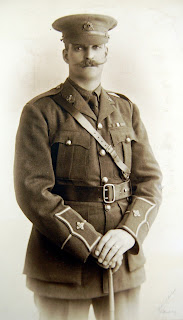 Sunday 26th March 1916: The adjutant of the 2nd Battalion tells us that football matches are still going on now they are behind the lines at la Houssoye. Yesterday the Battalion defeated the 17th Battalion, King’s (Liverpool) Regiment by one goal to nil. A new officer Lieutenant C G Tyler(1) also arrived. He also reported that during the week 25 men had gone sick; even though it is now, technically, Spring the weather remains cold.