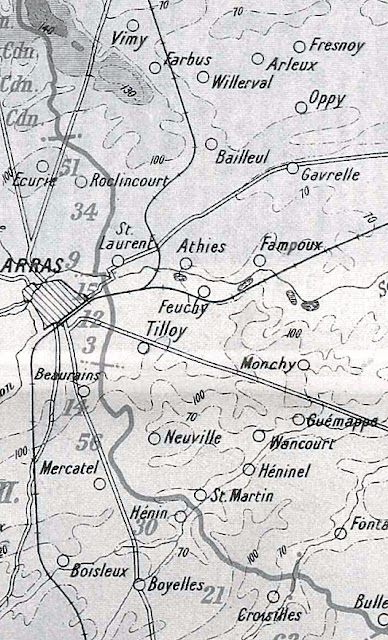 Correspondents at the Front are receiving news of a stunning victory. The British Army attacked east from Arras with three corps (VI, VII and XVII). Meanwhile the Canadian Corps has achieved a magnificent triumph in driving the Germans from Vimy Ridge, north of Arras and it is here we will begin.

Readers may remember that 1st Battalion, Bedfordshire Regiment, part of 5th Division, is at Cambligneul a few miles west of Vimy, acting as reserve to the Canadians. They were not needed in today’s battle but the commanding officer has passed on his intelligence of what occurred today. It seems that there were a series of huge mines buried under the German trenches on top of the ridge which were blown just before the Canadians went over the top. The Canadians then stormed into the German front line and well beyond. Almost along the whole line they achieved complete success. They now have possession of the high ground that overlooks not just the German defences but well beyond into the rear areas. The Canadians have consistently proved themselves élite troops in this war, the best of the colonial forces in France and on a par with the very best the Mother Country has to offer. This victory will only add to their laurels. 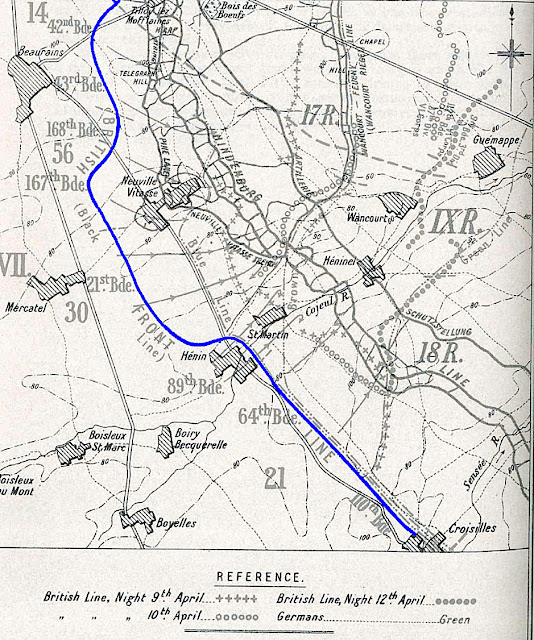 The attacks launched by the British divisions today ran in an arc from Croisilles in the south up to Roclincourt in the north. In the south VII Corps launched attacks with (south to north) 21st, 30th, 56th and 14th Divisions. The 2nd Bedfords form a part of 30th Division and were in support to the assaulting battalions, more of their experiences will be related after a brief review of what took place across ther whole front.

Each of the assaulting divisions gained considerable ground. 21st Division were on the right flank of the British attack. They were not to attack until it was clear that the attack by VI to the north had been successful. Thus it was not until just before four o’clock this afternoon that they went forward. However, the division was only able to capture about two-thirds of the ground in front of its first objective due to heavy fire.

30th Division also had to wait until afternoon to attack, though the Bedfords, as we will see, had an important task to carry out in the early hours of the morning, in which they were successful. 89th Brigade was given the task of taking the remains of the village of Héninel. They passed through Saint-Martin-sur-Cojeul about 3.30 pm but could get no further in the face of unbroken barbed wire and heavy machine gun fire. The two assaulting battalions of the King’s (Liverpool) Regiment suffered around two hundred casualties each. 21st Brigade of this division attacked at 11.30 this morning but also failed, for the same reasons. Today has been frustrating and discouraging for a division used to success.

Immediately north, 56th (1st London) Division made their attack at 7.45 this morning, tasked with taking Neuville-Vitasse and the Hindenburg Line beyond. They succeeded brilliantly in taking the village in the first hour of the attack and managed to take the front line trench of the Hindenburg Line – a fine achievement capturing 2,000 yards and over six hundred prisoners.

The left-hand division of VII Corps is 14th (Light) Division. Their task was, of course, to get into the Hindenburg Line, but a particular difficulty would be a large German defensive system Headquarters have dubbed The Harp, due to its shape. The division had to take the southern third of this fortification. They also had to tackle a position known as Telegraph Hill. With the aid of tanks the division took its objectives in decisive fashion, some reports suggesting that the defenders seemed demoralised, certainly not up to the standard of the enemy’s usual troops. 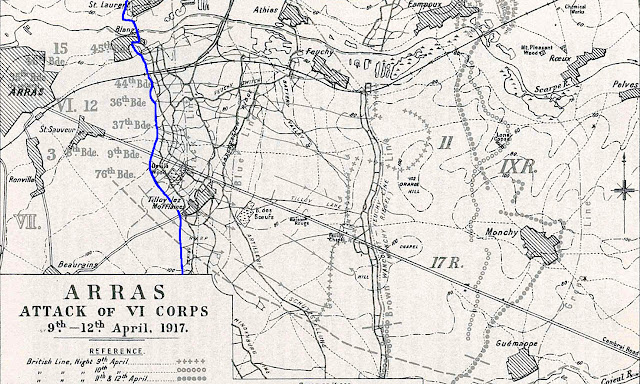 Next in the line going north is VI Corps. Here again great success attended the day’s efforts. 3rd Division was given the task of sweeping through the Hindeburg Line and on to the supporting trenches beyond, known as the Wancourt-Feuchy Line. They would have to take the northern two-thirds of The Harp and the village of Tilloy-lès-Moufflaines. The attack began at 5.30 this morning and both Harp and Tilloy were taken. It seems that, as this is written, the division is still advancing on the Wancourt-Feuchy Line.

12th (Eastern) Division had been sheltering in caves and tunnels, reportedly they could go from the crypt of the cathedral in Arras to the German front line entirely underground! One of their objectives, shared with 15th Division, on the left, was the capture of Observation Ridge, behind which German artillery was massed. This ridge did not fall according to the timetable, holding out for three hours longer than expected, but it did fall. The German artillery behind it was ripe for the taking and over thirty pieces were captured. Unfortunately, however, the Wancourt-Feuchy Line could not be breached. It seems harsh to cavil at this failure given all that this division achieved, but it did mean that a complete breakthrough into the open country beyond could not take place. Still, all attacks in this war expect great things and have to settle for what they can get(1).

37th Division was ordered to take the villages of Guemappe and Monchy-le-Preux once 12th and 15th Division took their objectives. One of the assaulting battalions was 6th Battalion, Bedfordshire Regiment. However, it did no assaulting today as the other two divisions had not managed to take all their objectives. In common with the rest of the division the Battalion simply dug in as far forward as it could get, in this case the road running north-south through Feuchy Chapel.

The 15th (Scottish) Division advance captured more German artillery pieces on the other side of Observation Ridge. It also took the village of Feuchy on the south bank of the River Scarpe and forward patrols entered Fampoux on the north bank. The Scots (of two divisions) achieved more, perhaps, than any others on a day of some success for most attacking units. VI Corps in all has advanced, on average, two miles, it is reckoned. 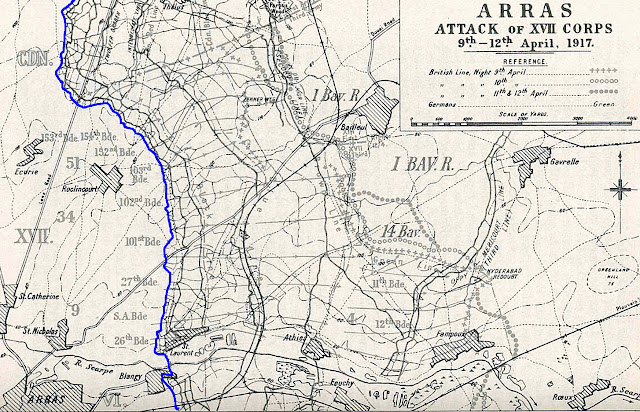 The northern corps in this attack was XVII Corps. On the left of one Scots Division, 15th, was another, 9th. It has been in the neighbourhood of Arras since the beginning of December last year. One might think these Scots in competition with their compatriots, so great was their advance. They took the villages of Saint-Laurent-Blangy and Athies and all their objectives along with two thousand prisoners!

4th Division were given the task of moving through 9th Division to assault the final objective for the army today. Many Germans, it is reported, ran forward and surrendered rather than fight. If this is the shape of things to come this war might be over before the Americans arrive! The village of Fampoux, entered by patrols of 9th Division, was taken. The advance of 15th and 4th Divisions has been prodigious. It is believed the advance, three and a half miles is the greatest made in one day by anyone since trench warfare set in back in the autumn of 1914.

34th Division also advanced a long way, in the face of largely ineffective opposition. It is believed that some positions were abandoned wholesale by their terrified opponents. Only on the left, 103rd Brigade, was total success not achieved and even here good progress has been made.

The third Scottish formation attacking today are our old friends the 51st (Highland) Division, which spent the first months of the war in Bedford. They form the left flank of the British attack, and have the triumphant Canadians on their left. They encountered stiffer resistance than their fellow countrymen. As a result, it is reported that they have suffered many casualties. It has also failed to gain its final objectives, but has advanced a good distance, and taken seven hundred prisoners to boot, which is not too shabby!(2)

Now to return to the actions of the 2nd Bedfords. They had been given the job of taking the village of Saint-Martin-sur-Cojeul, north-east of Hénin-sur-Cojeul. At 1.30 this morning D Company under Second Lieutenant J P Pitts attacked the village. At the same time C Company under Captain R E Oakley pushed forward on the flanks and established posts. After D Company had cleared Saint-Martin, Second Lieutenant A F Aldridge of C Company established a post holding one Platoon. This attack, in pitch darkness resulted in three men wounded and the capture of a number of prisoners of the 86th Reserve Infantry Regiment.

The remainder of the Battalion’s morning was quiet and was spent in fitting and resting. When the 89th Brigade attack began at 2 o’clock this afternoon A and D Companies were supporting 19th Battalion, King’s (Liverpool) Regiment south of the River Cojeul. B Company supported 19th and 20th King’s north of the river. C Company was in posts at Saint-Martin and in reserve. 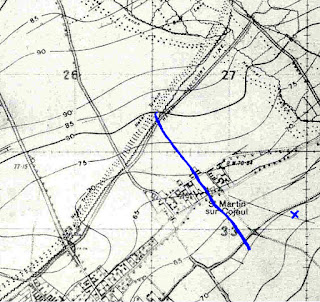 Though the enemy put up a fairly strong barrage in Hénin-sur-Cojeul, B Company avoided casualties by keeping to the left of the village. A and D Companies crossed the river 500 yards west of Hénin. The attack, as mentioned above, was held up by uncut wire and by machine gun fire, also owing to 21st Brigade on the left being held up. In the end B and D Companies dug in as shown in blue on the map above with A Company in advance on the right flank as shown by the blue cross.

(1) Sir Edmund Allenby, Commander-in-Chief of Third Army reportedly said that they had aimed for the sky, but hit the ceiling.
(2) Total prisoners-of-war taken that day were reportedly about 5,600.