Lord Ampthill has been in contact again this evening, to relate the latest in the little war his battalion, 8th Bedfords, is fighting south of Loos. At dawn this morning, under gruelling artillery fire, the battalion again moved forward down the enemy trenches, using bombs. Whilst A Company was held up by a strongpoint C Company, under Captain G D Brewster, took all their objectives, as well as 27 prisoners and a machine gun with a trench mounting. Captain Brewster and his second-in-command, Second Lieutenant W T Lyons, did “excellent work”, according to Lord Ampthill. 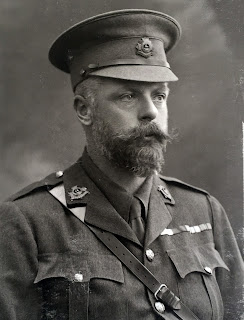 For the rest of the day the Germans have bombarded the ground newly taken by the battalion as well as the back areas, with heavy howitzers. In his lordship’s words: “despite casualties and difficulties met with in getting up supplies the ground taken towards Hill 70 was held. In this attack the 1st King’s Shropshire Light Infantry were on our left and also gained their objective. The battalion was congratulated for their good work by the Brigadier and General Officer Commanding 6th Division”. His Lordship’s voice was full of pride.

We have heard that the French have again met with success in their great offensive on the Chemin des Dames. There is talk that by the time the offensive begins again here at Arras the enemy may be under severe pressure in two places fifty miles or so apart and may crack in either one of them.