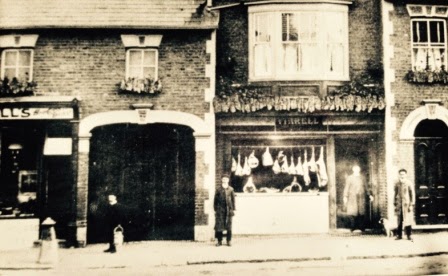 Tuesday 19th January 1915: Private Arthur Kent of , Linslade has been wounded as he helped a fatally injured comrade while fighting with the 1st Battalion of the Bedfordshire Regiment. At Ypres on 7th November he was fighting side by side with Private Bert Spacey of  when Private Spacey was shot. As he fell Private Kent caught him, but as he turned to lay his comrade down he was exposed to the enemy’s fire and was hit in the shoulder by a bullet. After a short time at home recovering from his injury Private Kent returned to the Front where he has now been wounded again fortunately only slightly.

Private Spacey was aged only 19 and was the son of Mrs Ellen Spacey of , , . She has received a letter from another fellow soldier, Private Harold H. Saunders, who says “He died as I know he would have wished, fighting for his country and those he so dearly loved. The loss to you and to us, his comrades, is great; but we all have the consolation of knowing that he died doing his duty.”

Private Kent first joined the army as an 18 year old in 1902. He initially joined the Corps of Hussars but soon transferred to the Bedfordshire Regiment. In December 1905 he became a reservist and has since worked as a coal miner in the  – an unusual occupation for a Linslade lad – and latterly as a railway employee. He married Maggie Barton in May 1913, putting their family situation on a regular footing as the couple already had a young son, William George Arthur, born in March 1912, and Maggie was pregnant with her second baby. Sadly this baby, named Harry, died in January 1914 when he was only two months old. [1]

[1] No doubt due to his mining experience in April 1915 Private Kent transferred to the Royal Engineers as a tunneller. He served in this capacity in  until May 1917 and then again from January 1918. He survived the war and was demobilised in February 1919. Harry and his wife had a third child, Kathleen Doreen, born in 1924. In 1911 he appears in the census living with his brother’s family in ; both the  were listed as “coal miner, repairer”. Private Spacey has no known grave and is commemorated on the le Touret Memorial
Posted by Kathryn at 07:00