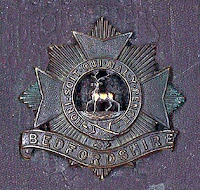 Wednesday 12th May 1915: Readers may remember that on 18th March we featured the Cogan family who have lost so many of their family to the ravages of this war. We have now heard that their sad plight has touched even the highest in the land. J. W. Pensenby, Keeper of the Privy Purse sent the letter below to Mr. W. Cogan of Furneux Pelham in Hertfordshire.

"It has been brought to the King's notice that you have had four sons and a son-in-law in the Army, three of whom have been killed, while the fourth has been severely wounded".

"Although an expression of the King's sympathy will already have been conveyed to you, His Majesty wishes me to assure you that he much appreciates the spirit of patriotism and self-sacrifice which prompted your sons to come forward and give their lives for their Sovereign and Country".