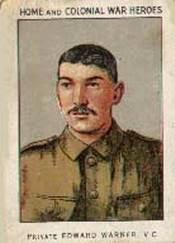 Tuesday 29th June 1915: We have heard today that the late Private Edward Warner of 1st Battalion, Bedfordshire Regiment has been awarded a posthumous Victoria Cross for his heroism. It was near Hill 60, that centre of terrible carnage, that on May Day, Private Warner, for his bravery won his VC and died shortly after. The official citation adds: “After Trench 46 had been vacated by our troops, consequent on a gas attack, Private Warner entered it single-handed in order to prevent the enemy taking possession. Reinforcements were sent to Private Warner but could not reach him owing to gas. He then came back and brought up more men, by which time he was completely exhausted, but the trench was held until the enemy’s attack ceased. This very gallant soldier died shortly afterwards from the effects of gas poisoning”.

The official entry on Private Warner’s papers stated that he died on May 2nd, of gas poisoning. His mother lives at 38 Cannon Street, Saint Albans  and he enlisted in the Bedfords on June 27th 1903 and after serving three years was placed on the reserve, He was called up on August 5th 1914 and went to the front on August 14th 1914 and had been right through the campaign without a scratch. In February he was home on leave. A strapping, hail-fellow-well-met comrade, he was very popular in the Battalion.

His widowed mother, a grey-haired old lady, said to an interview on Wednesday: “I am proud of my boy, very proud, but nothing can replace him. I wish so much he had lived: it would have been so different. He was a good boy to me, he was my only support, for his father died two years ago, and his only brother has not been heard of for several years. His father used to say that Eddie’s only fault was that he enlisted. His father would have been proud of his V. C. and would have altered his opinion. He was my all”. The old lady concluded: “I have no one else now – my husband and two sons, both lost to me”.