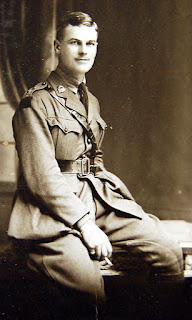 Monday 26th June 1916: The 2nd Battalion are at Maricourt on the Somme. All day yesterday our guns were bombarding enemy positions ahead  of the big push which everyone realises is coming. At 11.15 last night a party of two officers and forty nine other ranks carried out a raid on the enemy's lines opposite. It was quite a success, all the party returning to our lines safely and capturing one wounded prisoner. Six of our men were wounded, one has been temporarily blinded by the flash of a shell and one was given a nasty gash by getting tangled up in barbed wire.

The divisional commander, Major-General Shea has sent the following message: “Hearty congratulations on your success of last night due to careful and thorough preparation. I am very pleased. Please thank Officers and men”. The names of the raiding party are as follows: