Fifty Eighth Day of the Third Battle of Ypres 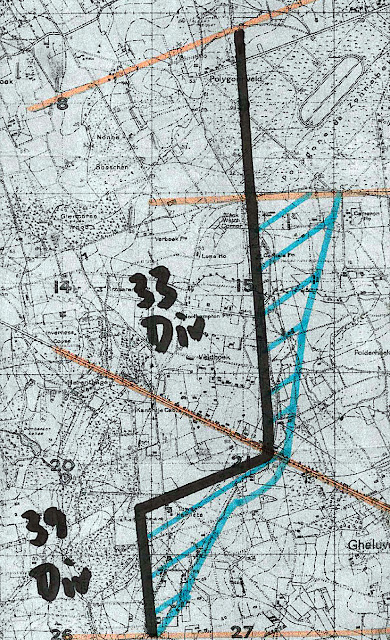 It seems that the armchair generals of the press corps were right in their guess, reported Monday, as today seven divisions have launched another attack, including assaults on Polygon Wood.

Only one of these attacks has been made south of the Menin Road, and that by 39th Division which began its attack in a V-shaped position where a German salient extended into our lines as a result of the failure of 41st Division to take the Tower Hamlets strong-point complex on 20th of this month. The two assaulting brigades were 116th and 118th, and the assaulting units included the 1st/1st Battalion, Cambridgeshire Regiment, the only battalion of this Territorial Army regiment to be overseas on active service. The ground here was in the usual state for this battle - a stinking marsh - however the men from Cambridgeshire were able to take their objective, Joist Redoubt and the division as a whole has taken Tower hamlets and smoothed out this bulge into our lines into something like a more pleasing straight line up to the Menin Road.

Incidentally, speaking with the adjutant of the Cambridgeshires, your correspondent learned that this battalion reckons it has suffered deaths of 475 of its number since its war began, including fourteen officers of captain’s rank and twenty one other officers.

Immediately north of the Menin Road is 33rd Division. Their task was to support the attack made by the Australians on their left flank and to regain the ground the Glasgow Highlanders lost yesterday. The latter task they have largely succeeded in achieving. At one point the Glasgow men are said to have performed something akin to the famed Highland Charge of days of yore in driving off an enemy counter-attack, so eager were they to be avenged on their for. 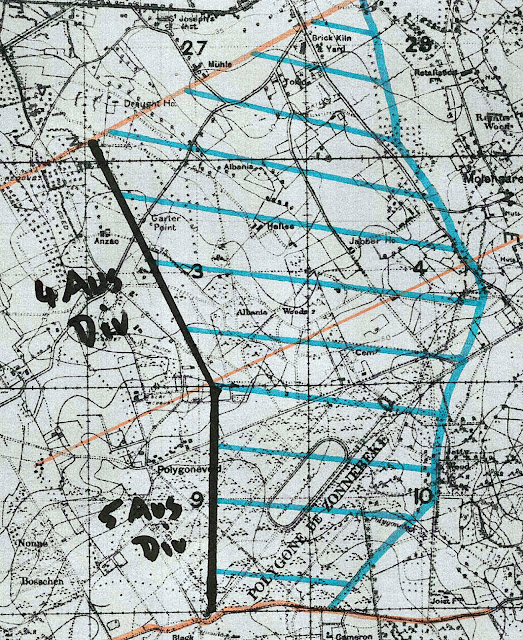 Both Australian Divisions, 4th and 5th, went into action again today after their successes on 20th of this month. The 5th Division used two brigades to attack Polygon Wood which, we understand, they have largely, if not wholly, taken. 4th Division’s first task was to take the northern parts of Polygon Wood and push on towards Molenaarelshoek and the ground south of Zonnebeke, which they achieved, occupying the brickyard south-west of the latter village. Both these Australian divisions have again performed very well and accomplished all that has been demanded of them. 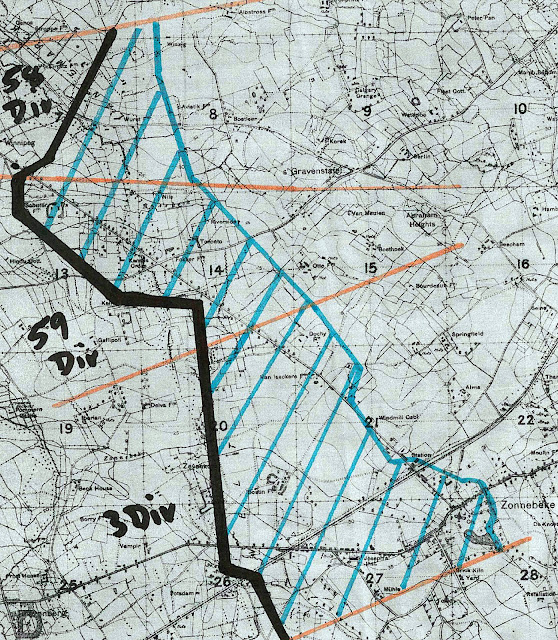 On the left flank of the 4th Australian Division is 3rd Division, new to the line and to this struggle. Their attack was to head in a north-easterly direction. The division used 76th Brigade on the right and 8th Brigade on the left. Both brigades crossed the Steenbeck, quite a major feature of this part of the landscape, 76th Brigade, we understand, has occupied the western portion of Zonnebeke, certainly as far as the church. We believe that capture of the whole of this place, as well as its station, just to the north, was the prize, in which case the brigade has come up short, if not by much. 8th Brigade has also ended their advance, it seems, just short of their final objective but are consolidating the western slopes of Hill 40, though an attempt is underway to take the summit and east side too, as I write these lines(1).

On the left flank of 3rd Division, 59th (2nd North Midland) Division, began from a line which bent back sharply as it went north. Their attack, again, utilised two brigades. The attack has taken Dochy and Fokker Farms and a good long list of blockhouses - Toronto, Schuler Farm, Cross Cottages, Kansas House, Martha House, Green House, Road House, Riverside, Deuce House and Kansas Cross. The division is now not far from the hamlet of s’Gravestafel. Otto Farm was taken but has been threatened in the last half hour by a German counter-attack(2).

The final division in action today has been 58th (2nd/1st London) which attacked using 175th Brigade. This brigade has taken Dom Trench and pillboxes called Nile and Cairo; Dear House, Aviatik Farm and Vale House also fell but we understand that the enemy have made a strong counter-attack this evening and seem to have re-taken Aviatik Farm and Dear House, leaving the the brigade about four hundred yards short of its objective.

So ends another day of steady success. So fast on the heels of the advance of 20th September this advance gives hope that the elusive breakthrough might just be in reach, though the state of the ground and the depth of the strong German defences probably militate against this. Indeed, this battle has been characterised by slow, steady advances, immediately consolidated, what high command likes to call “bit and hold” rather than by any attempted rupture of the enemy line and eruption into the rear areas, which are seen, on the whole, as unrealistic expectations


(2) Some of the advanced posts gave way in this attack but reinforcements were brought up and the line, including Otto Farm, re-established.
Posted by Martin at 19:00