Eighty Ninth Day of the Third Battle of Ypres 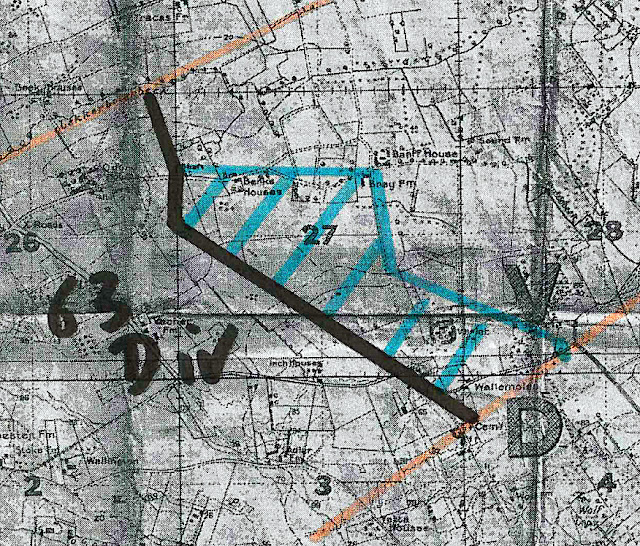 The attack on 26th October

Early this morning Hawke Battalion of 63rd (Royal Naval) Division recaptured Banff House. This strong-point had been taken in yesterday’s fighting but as darkness gathered last evening the troops inside had been forced to withdraw by enemy pressure. Some more ground has been taken by 4th Canadian Division, too. In fact they have taken all their first objective, which, again, pressure had forced them to relinquish yesterday.

Last night the 7th Battalion, Bedfordshire Regiment was relieved in the line by a battalion of the London Regiment. The adjutant explained to me, rather acidly: “This relief was about the worst on record, the relieving troops losing their way up and becoming thoroughly disorganised. The relief was not complete until about 10 a.m. this morning”.

Things are stirring in Palestine, as a few had predicted. With the arrival of the cooler weather another attempt to take the town of Gaza from the Turks seems to be on the cards. The adjutant of the 1st/5th Battalion, Bedfordshire Regiment has explained to us that on Thursday they worked on Gas Training with box respirators then attended a demonstration by 1st/4th Battalion, Northamptonshire Regiment on scaling cactus hedges. He notes that the General Officer Commanding XXI Corps (Lieutenant-General Edward Bulfin) came to the decision that it is better to use a spade to dig through a hedge instead of using scaling ladders as the place or hole once cut through the cactus hedge is permanent while scaling ladders easily break and are by no means permanent.

Yesterday more training with box respirators was undertaken. These were only issued to the Battalion on Wednesday. Less happily a Field General Court Martial assembled at headquarters for the purpose of trying 200456 Private Arthur Horace Holderness. We are pleased to report that no execution followed(1)


(1) No member of the Bedfordshire Regiment was executed during the First World War. Over a quarter of a million men from the British and Imperial forces were subject to court martial during the war with nine in every ten being convicted; 3,080 were executed. Common crimes were: absence without leave; drunkenness; desertion; insubordination and loss of army property such as a rifle. There is no record of Private Holderness’ offence. As well as death, and far more common, was imprisonment or field punishment. Field Punishment Number 1 involved being shackled to an object such as a wheel and left for up to two hours over a number of days. Field Punishment Number 2 involved being shackled by not attached to anything. With both the object was to humiliate the prisoner.
Posted by Martin at 19:00