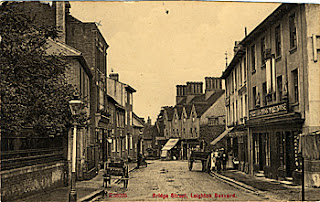 Wednesday 26th January 1916: Mr R T Mallett, the well-known tradesman of Bridge-street(1) has received a letter from his son, Lance Corporal Ronald A Mallett, intimating that he has again been wounded and is in hospital in France. Lance Corporal Mallett has been previously wounded while serving with the 2nd Bedfordshire Regiment in France where he has seen nearly twelve months fighting. Last Saturday week a rifle grenade landed in the trench near him and exploded and several pieces embedded themselves in his back. From the fact that he writes it is gathered that his wounds are not so serious as they might have been.

It will be remembered that this hero was wounded in the great Battle of Loos and was subsequently officially commended for his coolness and courage. His stay in hospital on that occasion was short, being only a week and he returned to the firing line without leaving France.

A Wesleyan local preacher of considerable gifts, Lance Corporal Mallett gave up a good situation at Llandrindod to enlist.