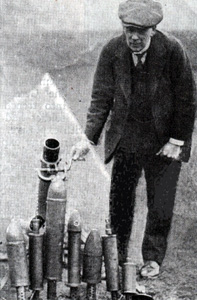 Wilfred Stokes and his mortar

Friday 7th January 1916: the adjutant of the 7th Battalion, in the front line near Fricourt on the Somme, tells us that yesterday the Germans opposite used rifle grenades and trench mortars aimed at part of their positions. He remarked: “Their grenades outnumbered ours so we retaliated with trench mortars. These did exceedingly good work. Timber was blown into the air from the enemy lines opposite. We must have inflicted serious damage the on enemy. All active hostilities ceased on their part after our mortars had fired”.


This highlights just how useful trench mortars have become. Indeed, those in the front line consider them indispensable. Sir Wilfred Stokes’ mortar was only introduced in September last year, in time for the Battle of Loos, but, as the above shows, has quickly proven its effectiveness. It is light (being smaller than the example shown above) at just over one hundred pounds and portable by a two man team enabling it to be moved to different positions in a trench system to prevent the enemy zeroing in on it and destroying it with artillery of their own. It can fire up to 25 bombs per minute at ranges up to half a mile. The bombs have a diameter of three inches and weigh 10 pounds, 11 ounces. The bombs go high into the air to drop into enemy trenches and cause substantial damage.