Day Eighty Nine on the Somme 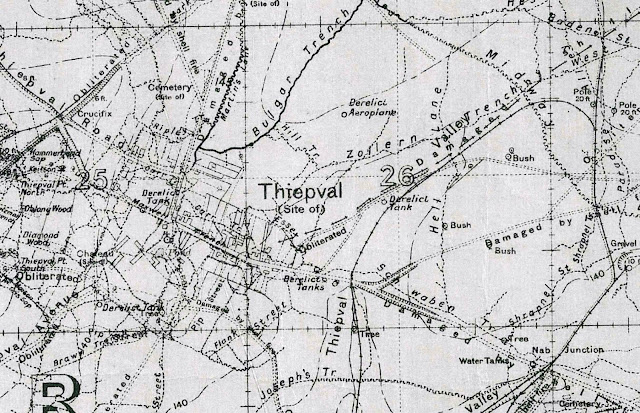 Wednesday 27th September 1916: From our Correspondent in the Field

This morning I received some splendid news from the adjutant of the 7th Battalion, Bedfordshire Regiment, Captain Bridcutt. Readers will remember that yesterday 54th Brigade of 18th Division seized a good part of the fortress village of Thiepval: “The Commanding Officer, Lieutenant-Colonel G. D. Price and I arrived at the Chateau in Thiepval. After conferring with Lieutenant-Colonel Maxwell, 12th Battalion, Middlesex Regiment, commanding the scattered portions of the three battalions (12th Middlesex, 11th Royal Fusiliers and 6th Northamptonshires) Colonel Price decided to attack the untaken portion of Thiepval - the north-western part of the village. Dispositions for the attack were as follows C and D Companies, commanded by Captains Leslie Keep and Mulligan respectively, were detailed for the assault which was to be carried out in two waves with C Company on the right and D Company on the left. A and B Companies were sheltered close at hand in German dug-outs. Zero was fixed for 5.30 a.m.” 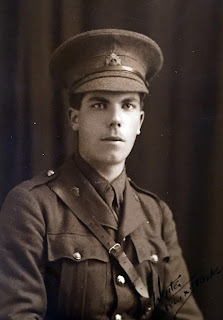 “The morning was extremely dark and the assaulting companies had great difficulty in forming up for the attack on the correct alignment. At about 5.45 all was ready and a few minutes later the two waves advanced, sweeping across the untaken portion of ground and the enemy trenches. Two machine-guns and a good deal of rifle fire opened from the enemy's lines but our troops continued to advance and in a short time were in possession of the German trenches on the north-western face of Thiepval. Captain Mulligan and Second Lieutenant Potts fell, badly wounded but during the action 36 prisoners were taken and about a hundred Germans killed by rifle fire and bayonets”.

“This action, though apparently small, was of the utmost importance as without the whole of the Village of Thiepval and the trenches surrounding it being captured, the whole line of attack was held up. So to the 7th Battalion, Bedfordshire Regiment (especially C and D Companies) belongs the honour and glory of the final destruction of one of the Germans’ strongest positions and one which they had boasted could never be taken”.

“Our casualties were 2 officers above mentioned and about 110 other ranks in the above action. The other three battalions of the 54th Brigade, who made yesterday’s attack on Thiepval, had been withdrawn to cover in our support area”. If Captain Bridcutt sounded elated he can be forgiven. The Battalion, and the division more widely, has achieved something of note today, the equal of its successes on the first day of the battle and at Trônes Wood.

I have since learned that of just over one hundred men wounded, 51 have been killed today, with two having died last night in moving up to support the brigade attack. A number of others will likely not survive the day. An officer killed, not mentioned by the adjutant, is Second Lieutenant Ian Ross-Taylor from Essex. Lieutenant Henry Potts is very gravely wounded and has been moved back to a hospital near Boulogne(1).

This evening Captain Bridcutt has been back in touch. It looks as if the battalion will be called on again tomorrow to attack one of the three redoubts which lie near Thiepval from north to east – Schwaben Redoubt to the north. This promises to be a more dangerous operation than the taking of the village. 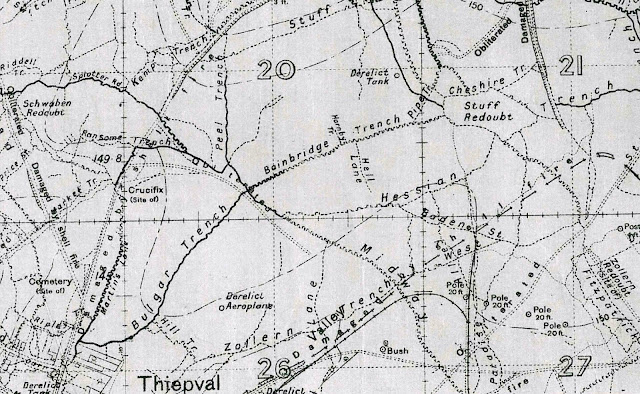 This afternoon 11th Division, having taken Mouquet Farm yesterday but failed to take another of these redoubts – Zollern Redoubt, tried again. Evidently they had done considerabe damage in their attack yesterday as they found the place empty and have gladly occupied it. No doubt the seizure of Thiepval also contributed to this evacuation as the place was then outflanked. They have also attacked the third of the redoubts, which lies just north of Zollern Redoubt – Stuff Redoubt. An attack here this morning filed but this afternoon 9th Battalion, West Yorkshire Regiment attacked alone. This can be disastrous but to the Yorkshiremen’s credit they have obtained a toehold on the southern face of the redoubt. An hour later another Yorkshire unit – 6th Battalion Green Howards, who had been due to attack with the West Yorkshires, took eighty or so prisoners in a nearby trench and joined their colleagues at the south face of the redoubt. 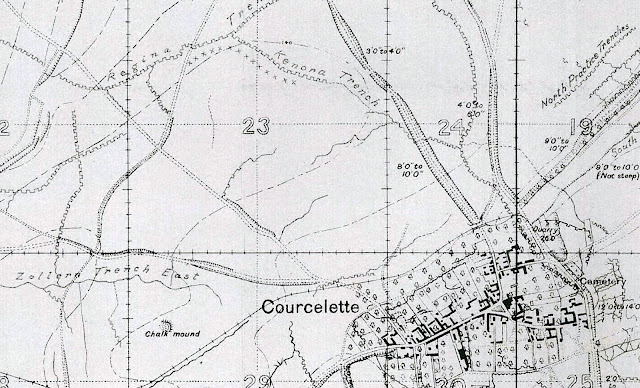 The Canadians have been involved in heavy fighting south of Le Sars over a trench called Kenora Trench, which is an eastern extension of the Regina Trench mentioned yesterday. 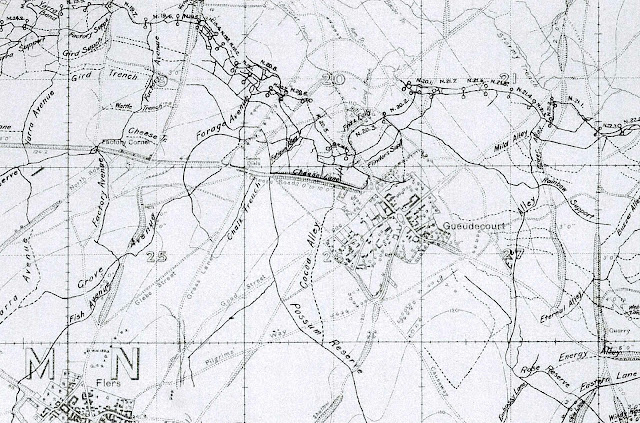 Elsewhere 55th (West Lancashire) Division have taken another section of Gird Trench, north-west of Gueudecourt, the village which fell yesterday. The Germans still hold part of this trench, where it joins with another called Goose Alley. 1st Division and 23rd Division have also made small gains today.

(1) He would die on 1st October and is buried in Boulogne Eastern Cemetery.
Posted by Martin at 19:00