A Wounded Officer's Description of the Shambles at Cherisy 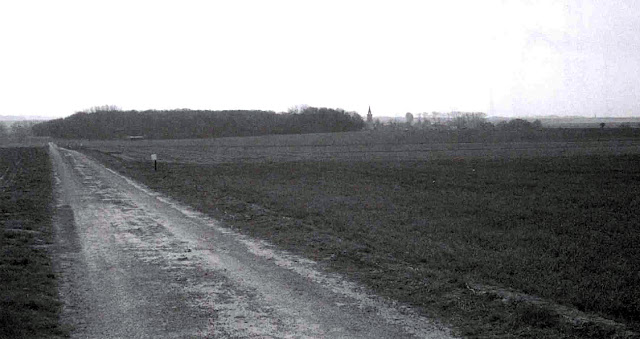 The ground over which the Bedfords attacked at Cherisy

I have been lucky enough to speak with Second Lieutenant Henry Cartwright of 7th Bedfords about the abortive attack at Chérisy two days ago and here is his story.

“On May 1st D Company, as assaulting company, took up their battle position in the front line. Captain Driver was in command with Second Lieutenants Angas, Lingwood, a newcomer, and myself as platoon commanders. Everything seemed favourable and the general opinion was that it would be easy going. From a sap in our front line we commanded a view over the Bosche lines for miles, a green, undulating country that looked most inviting and made us eager to get there. I was not anxious and windy as on previous occasions”.

“Zero was timed for dawn on 3rd and at 4 o’clock the barrage opened; our signal; out of the trenches we scrambled, up a slope and down into the valley. It was pitch dark and to make matters difficult, there was a ground mist in the low-lying land; touch and direction were soon lost and there were large gaps in our line”.

“As we approached to their lines near Chérisy the wire in front could be seen uncut. The ranks were wavering. Captain Bull and Company Sergeant Major Brand of B Company came up and just as we were discussing the line of advance, I saw a blinding flash, my rifle, smashed to smithereens, was knocked out of my hand and I was hit in the leg. With Company Sergeant Major Brand, wounded in the leg also, I crawled back and just as we reached a trench, Brand was killed by a shell. The most popular and daring man in the Battalion; it seems ironic that he should have been killed just as he had reached some cover. The Medical Officer found me and after putting on a field dressing, I hobbled to a dressing station”.

Amongst the other ranks 19 were killed in action, 48 are missing and so either dead or prisoners-of-war, 162 have been wounded, 6 have since died of their wounds, 4 are “missing believed killed” and 3 and wounded and missing. This makes a grand total of 242 officers and men killed, wounded and missing, about a quarter of the Battalion’s strength

Now we turn to developments to the south, around Bullecourt. Last evening the Germans made determined efforts to retake the thousand yards of the Hindenburg Line captured by the Australians over the last two days. These were defeated. Unfortunately, reports of the capture of Bullecourt yesterday by 7th Division seem to have been premature.

Today the Australians have been busy holding their trenches against a terrific German bombardment. 7th Division have been probing the Bullecourt defences where the enemy still seems to be entrenched in strength.