More Attacks at Arras on Day Twenty Five of the Battle 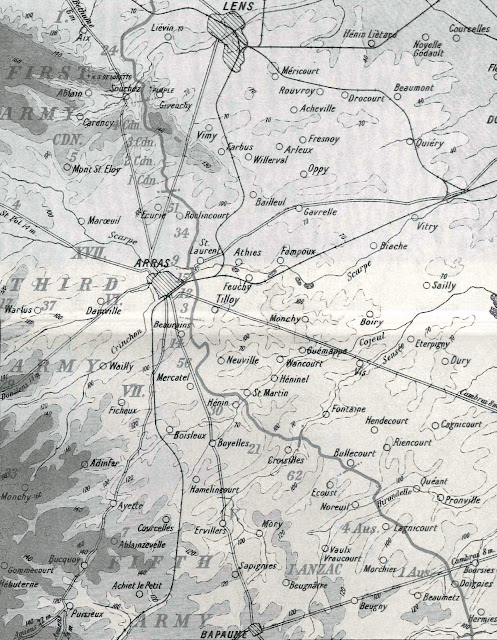 Today has seen another major assault undertaken against the Germans around Arras with three armies - 1st, 3rd and 5th all involved. In the south, the 5th Army was given the task of taking Bullecourt, Riencourt and Hendecourt. 3rd Army was to seize Fontaine-lès-Croisilles, Chérisy, the factory at Saint-Rohart, Pelves and the station at Plouvain while 1st Army, in the north, was to occupy Oppy and Fresnoy.

We will begin in the south with 5th Army. In order to take Hendecourt and Riencourt the 62nd (West Riding) Division, in its first major battle, was given the task of taking Bullecourt which here forms part of the defences of the Hindenburg Line. The Australians  tried to take this place on 11th April and it is clearly a difficult nut to crack. It is understood that the village is still in German hands as I write these lines. The Australian 2nd Division was ordered to take the Hindenburg Line on the right flank of the village of Bullecourt. Hard fighting here has, we understand, yielded a little success. Though only a small segment of the defences have been penetrated, by 6th Australian Brigade, that task has been no easy one and the troops involved have performed splendidly.

The main weight of the attacks today has fallen, as throughout the battle, on General Allenby’s 3rd Army. Once again VI, VII and XVII Corps have all been in action. VII Corps’ task was to advance in a south-easterly direction. 21st Division had to capture the village of Fontaine-lès-Croisilles and the ground to the south of it. This attack, we learn, has been something of a fiasco, as has the attack on Chérisy by 18th (Eastern) Division, in which 7th Battalion, Bedfordshire Regiment has taken part. 21st Division seems to have veered off course and run into 18th Division, which had to alter its course in turn. It looks as if no progress has been made. Having tried to raise the adjutant of the Bedfords, and having failed to do so a full report of their actions must wait until tomorrow, we hope they have not suffered too badly. As I write this word has reached me that most of the Battalion is still stuck in No Man’s Land unable to advance or retreat. The attack on 18th Division's left flank by 14th (Light) Division has also failed and, like those of the other two divisions, has gained no ground.

For three divisions to fail to take any objectives there must be serious reasons. We are hearing that the darkness was a major contributory factor, the attacks all beginning before dawn. The German artillery also seems to have been particularly destructive and the German counter-attacks, where any ground was momentarily taken (55th Brigade of 18th Division succeeded, briefly, in occupying Chérisy), decisive.

North of VII Corps lies VI Corps with 56th (London), 3rd and 12th (Eastern) Divisions. These men were to take the factory at Saint-Rohart, a wood called the Bois du Sart and the village of Pelves. 56th Division achieved some solid success in some places but once again, we here, in others the enemy artillery caused great loss, resulting in the division having to retire to its front line once again. 3rd Division's attack, we understand, has had to be undertaken wearing respirators as the enemy deluged them not only with normal artillery fire but with poisoned gas shells too. It comes as no surprise, then, that we hear this attack has also stalled. To 12th Division has fallen, we are led to believe, the only success of the day, 36th Brigade having managed an advance of about a quarter of a mile, though the rest of the division could not match it.

XVII Corps was slated to take Roeux, the chemical works and Greenland Hill, all objectives which have been outstanding since 10th April. 4th Division attacked Roeux but it seems that, this evening, it is still held by the enemy. 9th (Scottish) Division has only two brigades because its South African Brigade is very weak due to reinforcements being wanting, thus 52nd Brigade from 17th (Northern) Division was temporarily transferred to 9th Division to replace it. Here again the attack was unsuccessful and a colleague of mine from Scotland remarked to me that he fears that one battalion, 6th King’s Own Scottish Borderers has been all but wiped out.

With only one brigade of 3rd Army having made any progress we have been waiting to hear news of 1st Army’s attacks on the northern limits of the battlefield. Here XIII Corps used 31st Division and 2nd Division to assault the enemy line. 31st Division assaulted Oppy Wood but seem to have been unable to make consistent progress, a German counterattack even  managing to recapture Gavrelle windmill before they were driven out. 2nd Division is very weak in strength and, trying to capture the village of Oppy, was unsuccessful and is now so reduced in numbers that the phrase “bled white” is being used.


2nd Division was to secure the flank of the Canadian Corps which was to take the village of Fresnoy. In this they succeeded, though at great cost, which meant that the Canadian attack could take place. Here has been the shining light in a day of gloom. The splendid Canadians have taken the village and, last we heard, are still holding it. So another victory has been added to the already extensive battle honours of the men from North America in this war so far.