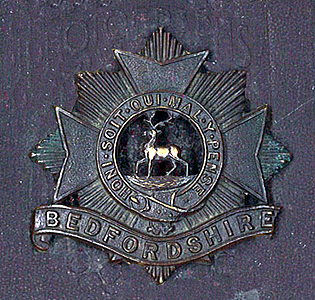 In far-off Palestine 1st/5th Battalion, Bedfordshire Regiment, went into the line again last night in a support line. They are now in a different position, holding three strongpoints - Merioneth Redoubt, Flint Redoubt and Welch Redoubt all, as can be gleaned, formerly in the sector held by 53rd (Welsh) Division. They moved off at seven o’clock yesterday evening and arrived without incident. Rations, water and light kit were brought by camels during the night to headquarters where the companies sent the necessary guides. The relief was complete by half past nine. During the night a number of "overs" from enemy rifle and machine-gun fire aimed at the front line, fell in the bivouac area at headquarters wounding one private, one native camel driver and his camel.

The 1st Battalion, Bedfordshire Regiment, have been continuing their normal pattern of training and entertainment behind the lines north of Arras. All companies did rapid firing on the range followed by bayonet fighting and rifle grenade practice in the morning. The Brigade Horse Show took place in the afternoon. The adjutant told me that the battalion were first in General Service Waggon turn-out, second in wrestling (though whether the wrestling was carred out on horseback he did not elaborate, and third in officer jumping (officers on horses jumping obstacles, rather than people jumping over officers, one presumes). 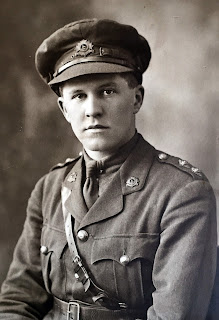 The adjutant of the 7th Battalion, near Chérisy, told me that two Germans were shot by D Company early this morning. The bodies were later recovered and the men proved to be from 459th Regiment. Sadly Lieutenant F N Sherwell was badly wounded a few moments ago by heavy shelling and trench mortaring(1). One man has been killed and five wounded in D Company.