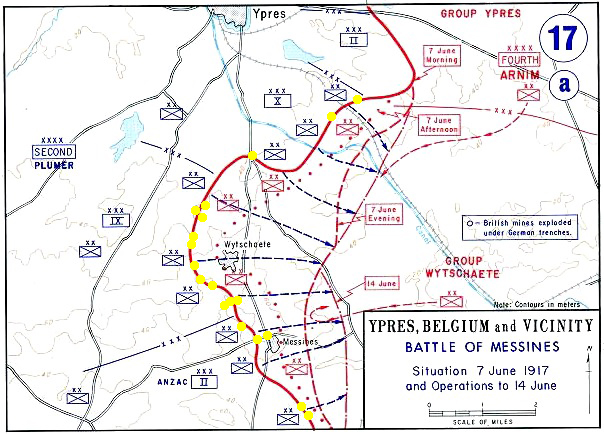 When the history of this war comes to be written it seems likely that the name Messines Ridge will figure prominently in it. By great good fortune your correspondent was lucky enough to see some of the fighting yesterday at close quarters, paying a scheduled visit to the 2nd Battalion, Bedfordshire Regiment, on Observatory Ridge.

The attack was made by three corps of Second Army - from south to north - II ANZAC Corps, IX Corps and X Corps. Their mission was nothing less than the capture of the whole Messines Ridge. The land around Ypres is, in general, flat, with a few low ridges which, in such a flat landscape, stand out with more than usual prominence. Messines Ridge gives splendid views over our lines to Ypres in one direction and over the German second and rear lines in the other; its capture will allow unparalleled observation of German activity and of targets for artillery. 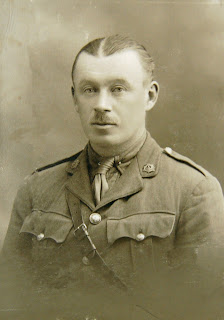 The attack was preceded by the explosion of twenty enormous mines under the German defenses. This tactic is well-known and was used in the Battle of the Somme last year, but never on the scale of today. Having caught a lift to the 2nd Battalion positions on Observatory Ridge before dawn I was privileged, by great good fortune, to see these mines. I have been sitting at the typewriter for a good half-hour and have been forced to concede that my powers of description fail me. An artillery barrage had preceded the firing of the mines, which told me that something big was up, so it was in a state of great excitement that I met the commanding officer of the Bedfords, Lieutenant-Colonel, E S M Poyntz, and his staff. I remember the atmosphere was very tense but also expectant. The Bedfords, Lieutenant-Colonel Poyntz informed me, were not taking part in the attack, but had to be on standby for any eventuality.

The guns fell silent about half an hour before dawn. And then a wonderful thing happened. In the new-found silence a number of us were sure we could hear a nightingale singing somewhere in the blasted woodland behind us. Perhaps it was imagination, but that moment will live with me until the end of my days, as will what happened next. At 3.10 a.m. a terrific shaking was felt followed, what seemed a few seconds later by a roar such as I have never heard, the sound of an passing express train was a lullaby compared to it. It seemed to me at the time that it went on for ever, but I have learned since that in a half-minute or so all twenty of the mines were fired (see map above) and, of course, it took a while for the sound to reach us from those further away(1). We were in a dug-out but even so for a brief moment the interior was lit up as brightly as if dawn had already arrived and we were in the open. As can be imagined there was a mad scramble for the exit, after the colonel, of course, to see what was happening.

It was then that the scale of this assault was brought home to me, and I will now try to describe it in more detail. Each of the three attacking corps had three objectives, the Blue Line, Black Line and Oosttaverne Line. After the explosions the divisions assigned to the attack went forward behind a creeping barrage of artillery shells. Each corps easily took the Blue Line, so great was the destruction caused by the mine, any man not vaporised by the explosions was too stunned to react to the situation, and large numbers of prisoners were taken.

By five o’clock this morning the first part of the German second line was in the hands of the attacking British, New Zealand and Australian troops. A pause of two hours then ensued to allow for consolidation and fresh battalions to be brought up to continue the assault and take the rear portion of the German second line. This duly happened meaning that both Blue and Black Lines had been taken. Now to press on to the third objective, the Oostaverne Line!  First came a pause to allow any German counter-attacks to be received in prepared positions rather than on the move. At 3.10 this afternoon this third phase of the attack began. As I write this the situation bids fair for this to be achieved. This is unprecedented - a major attack involving 200,000 men or so taking all its objectives. There is high excitement tonight that a real breakthrough to the peaceful countryside beyond the front line has been achieved.

Your correspondent is ending the day where he began, with 2nd Bedfords, although, by chance, he met with an acquaintance from 8th Battalion King’s Own Yorkshire Light Infantry a little while ago. This unit was on the right flank of the Bedfords this morning and took part in the attack. This acquaintance is a local man, Dan White from Husborne Crawley (his real name is George but is is known as Dan after his father). He expressed himself satisfied in no uncertain language that the enemy had taken “a drubbing”. His unit was one of the worst affected by casualties on the First Day of the Battle of the Somme and saw hard fighting in October around le Sars in which many of his comrades were killed. 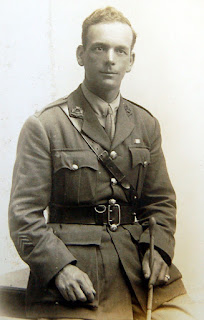 At 9.30 this morning. 2nd Lieutenant A W Joyce and twenty other ranks got across No Man’s Land to the enemy trenches, and were just getting into trench, when they saw it was crowded with Germans. The Patrol got back safely. An hour later a party of about three hundred Germans came across to front line trenches about three hundred yards to the right of the Bedfords, which had been vacated by the attacking KOYLI. Vickers and Lewis guns took advantage of this target and accounted for a large number, a few however got into the Bedfords’ lines, but these were soon driven out by a bombing party under 2nd Lieutenant T G Searle. Some men of the 2nd Canadian Tunnelling Company rendered valuable assistance in this little operation. 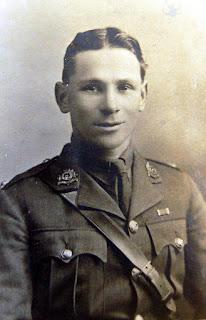 The ferocity of the explosions of the mines and of our barrage may be measured by the fact that two men of the Bedfords have been sent to the rear with shell shock. One can only guess at the effect on the enemy.

(1) This explosion of mines, totalling 933,200 pounds (416 tons or 424,181 kilogrammes) of high explosive over a wide area, is ranked as one of the largest non-nuclear, man-made explosions in the history of the World and was probably the loudest in history up to that time. It was apparently heard as far away as London and even Dublin and in nearby Lille it was thought an earthquake was taking place. Around ten thousand Germans died instantly. Six mines were not used, one was detonated by lightning in 1955 and the other five remain lurking beneath the peaceful landscape.
Posted by Martin at 19:00