Attacks at Cambrai and in Palestine 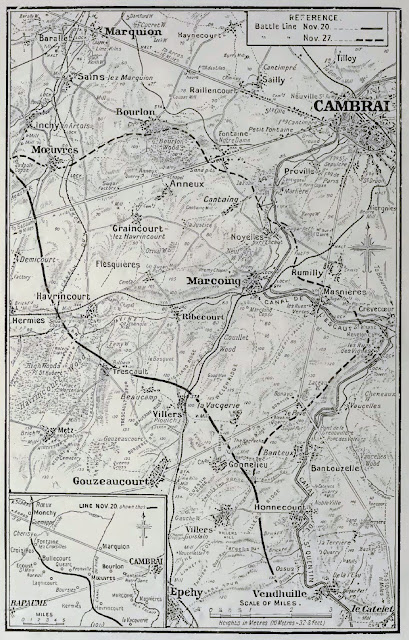 Here at Cambrai the enemy have launched a surprise attack of their own, just as it seemed the year would end with our forces digging in to consolidate the gains they have recently made. The attack has covered the same area as the initial British attack, all the way from Bourlon Wood in the north to Honnecourt in the south. At times during the day it seemed as if the enemy might carry all before him and he has managed to advance nearly three miles in places. But Tommy Atkins is never as dangerous as when his back is against the wall and our men have fought with terrific spirit once the initial surprise was past.

Still, it must be admitted that the enemy have regained a good deal of the ground they lost ten days ago. Strangely enough it was the scene of the bloodiest and most frustrating fighting for our men, around Bourlon Wood, which has also seen the most successful defence against the German attack. 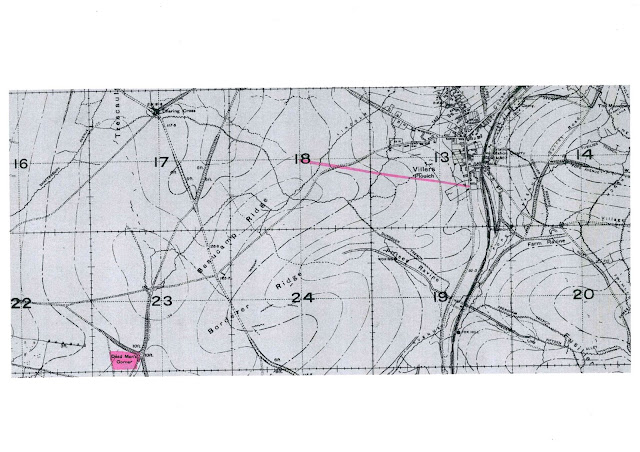 The adjutant of the 8th Bedfords, which began the day in Villers-Plouich has been able to let us know that they were called upon to go to the assistance of the right flank of 29th Division. They advanced to Dead Man’s Corner at 11.30 a.m. under light shell-fire. They were then ordered to move further forward and form a defensive line on Highland Ridge (the rough position shown in pink on the map above) covering the line from Beaucamp to Villers-Plouich. They were all in position by 2 p.m. and now wait to see whether the enemy puts in an appearance.

Yesterday in Palestine the 1st/5th Bedfords were also under attack. Just after midday the Turks began to shell their positions on Zeify Hill near Beit Nabala. This continued intermittently throughout the day. As the adjutant drily described it in his wire: “at same time the enemy infantry showed a disposition to attempt to gain ground”. They were fired on from Zeify Hill as they advanced on 10th Battalion, London Regiment, at Deir Tuweif. They were stopped about nine hundred yards from the Londoners’ position.

After dark, about 6 p.m. the Turks attempted a surprise attack with about a company of men on Zeify Hill, which they have clearly identified as the key to making any advance in the area. They managed to capture one of the Bedfords’ machine-guns but an immediate counter-attack organised by Captain F B Hobbs drove them out again at bayonet point, though they did bear their prize with them, much to the chagrin of Captain Hobbs and his men. The Turks left behind were counted as nine dead (including two Austrians(1)) and three prisoners. It was some emollient to losing the machine-gun that thirteen enemy rifles were captured. There were numerous dead Turks in front of the Bedfords’ position, most of which could not be collected for burial. The Bedfords have lost one officer and two other ranks killed and eight other ranks wounded.

(1) Probably from the German Asia Corps, part of the Turkish 7th Army.
Posted by Martin at 19:00