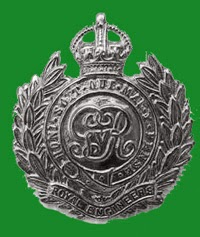 Tuesday 29th December 1914: The 1st Field Company of the East Anglian Royal Engineers(1) have the distinction of being the first Bedfordshire Territorials to go to the Front. Their peace station is Bedford but since mobilisation they have had a wandering mission in the Eastern Counties, engaged on coast defences and other necessary preparations, for three months. They then joined the division at their war station at Bury Saint Edmunds. For the last fortnight they have been under orders for the Front and have been receiving their special service equipment. The order to move has come today. And early tomorrow morning will be off, bound for “somewhere in France”(2).

The men of these Royal Engineers field companies will have vital work to do. They will construct field works, both in the trenches and in no man’s land, communications routes and fortresses. Often they will oversee the work of ordinary infantry units performing fatigues, sometimes they will perform the duties themselves. Thus they will come under fire, and have to return it at times, whilst performing their regular tasks. We salute them

(1) Officially 483rd (1st East Anglian) Field Company (Territorial Force)
(2) They joined 2nd Division in January 1915, serving with it throughout the war.
Posted by Unknown at 07:00