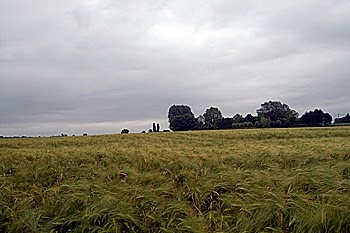 Sunday 1st November 1914: After the hard day they had yesterday All Saints Day has proved kinder to the 2nd Bedfords. The Germans massed in the fir wood in which so many of the battalion were captured yesterday. It looked as if an attack was imminent and everyone was tense with anticipation but, for whatever reason, no attack developed. It may be, as we speculated yesterday, that the Germans are as tired and depleted as our own men and, perhaps, the steady way our chaps fought yesterday has given them pause for thought.

Fortunately the battalion, reduced to only about four hundred men and four officers has been reinforced during the day. Three new officers have arrived along with ninety six other ranks. We hope we do not speak prematurely but the feeling is that a great crisis has, for the moment, passed.

So intense was the battle around Ypres yesterday that we were unable to speak with our contact with the 1st Battalion. It appears that they, too, had a hot time further south near Festubert. He told us this morning: “Sniping continued all day and we found that the Germans were sapping and mining towards us on three sides and only about twenty or forty yards away”.[1]

“We could see their snipers crawling all around us, pushing sandbags towards us in front of them to protect themselves. If we tried to have shots at them we got our heads blown off by other snipers. It was a pretty miserable state of affairs and demonstrated the effect of superiority of fire rather unpleasantly to us. We however had to grin and bear it and swore vengeance on them when darkness came. It practically meant that we were surrounded and could not move”.

“To crown it all, we knew that they were mining hard and expected to be blown sky high at any minute. Corporal Tearle was shot through the head in a gallant attempt to get a sniper”.[2]


[1] Sapping was the practice of digging a trench forward from ones own front line and at right angles to it in order to be able to command no man’s land. Mining was frequent. Mine shafts would be dug towards and then under the enemy’s front line.  They would then be filled with explosives and detonated, obliterating the enemy’s trenches and men along with them.