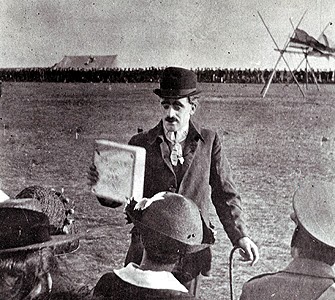 Friday 20th November 1914: We hear continually of the 1st and 2nd Beds Regiment and rejoice in their "magnificent" achievements at the front. We know all about our Territorials, the Yeomanry, the 5th Battalion and the Engineers, and the Field Ambulance. We "ken weel" the Scotsmen who are in our midst[1]. But how little we hear of the Special Reserves! Some of us know that they are under the command of Lord Ampthill at Landguard Camp, near Felixstowe, where they carried out their training in June, but few know more than that. It is time we realised in Bedfordshire what the 3rd (Reserve) Battalion of the county regiment has done and is doing.

All this time the men have been engaged in the work of coast defence and have watched day and night against a raid; but more than that, it is due to them that the 1st and 2nd Beds Regiment have been able to keep in the field. Something like 1,500 men and a large number of officers have gone out from the Special Reserves to the 1st and 2nd Battalions, and have taken part in their gallant deeds at the front. Further it is from the Special Reserve that the nucleus of officers, instructors have been provided for the New Army[2].

So during the last five months the 3rd Battalion at Landguard have been busy as bees, what with the constant departure of drafts, the return of wounded men from the front and the arrival of batches of recruits. The result of all this is, naturally, that just now the Battalion has taken on the character a Training Dêpot, and more officers and men are being rapidly licked into shape, and being imbued with the fine spirit of discipline and loyal performance of duty under Lieutenant-Colonel Lord Ampthill. It is not spectacular work and does not come into the limelight; but it is most valuable and patriotic service and we in Bedfordshire should never forget the 3rd Battalion at Landguard.