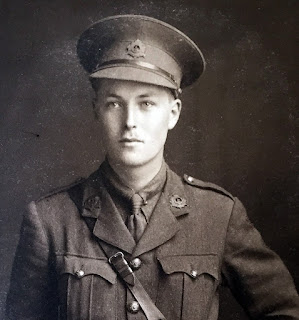 Thursday 26th November 1914: The adjutant of the 2nd Battalion has told us that the General Officer Commanding 7th Division, Major-General Thompson Capper, has congratulated Second Lieutenant Harry Willans on his patrol work.

Patrolling is very dangerous but very necessary work. The gap between the two front line trenches, ours and the Germans’, is known as no-man’s land. Patrols go out under cover of darkness and creep about in no-man’s land to try to discern what the enemy are up to. They get as close as they can to the enemy’s front line and listen. For those who have knowledge of German the things said by the enemy in their trenches may give clues as to any likely attack the enemy intend to make upon our lines. Alternatively, it might be discovered that sections of the enemy front line are lightly held, meaning they might be attacked and captured, advancing our front line by a few hundred yards and damaging enemy morale. Clearly Second Lieutenant Willans is an exceptional man and, should he survive his hazardous work, should make a fine officer.[1]

Major John Mackenzie VC joined the Battalion today bringing with him Second Lieutenant Baker, late of 4th King's Own as well as eleven other ranks. Major Mackenzie won his Victoria Cross in another war. An extract taken from the London Gazette dated 15th January 1901 records the following: "On the 6th June 1900, at Dompoassi, in Ashanti, Sergeant Mackenzie, after working two Maxim guns under a hot fire, and being wounded while doing so, volunteered to clear the stockades of the enemy which he did in the most gallant manner, leading the charge himself and driving the enemy headlong into the bush".

This war against the Ashanti was known as the War of the Golden Stool, the symbol of kingship over these people. It was the fifth war against these fierce West African warriors since 1823 and resulted in Ashanti territory being incorporated into the Hold Coast in January 1902.[2]


[1] Harry Willans would be twice mentioned in despatches, win the Distinguished Service Order and Military Cross, be made a Companion of the Bath, and CBE and would reach the rank of Major General, dying on 5th February 1943 and being buried at Tobruk. He was son of James Tetley Willans and Henrietta Mary Willans, married Dorothy Joan and lived in Stevenage [Hertfordshire].