Our Man in Hospital 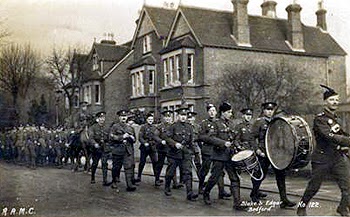 Sunday 8th November 1914: Readers will be delighted to know that our man with the 1st Battalion, badly wounded yesterday, has survived the night. He has contacted us this morning to tell us more of his adventures yesterday. "The journey in the darkness through the wood on a stretcher was not too pleasant but we eventually arrived at one of the châteaux where I was just looked at to see if I was dead or not I think and then went on to the road and put in a horse ambulance. Here I found, amongst others, Major Allason and Macready, who was very badly hit in the stomach".[1]

"We bumped along in the ambulance along an awful road, frequently falling into shell holes or into trees that had fallen across the road, for five miles into Ypres. It was a most painful journey and absolute agony for some of those who were almost dying and we thought it was never coming to an end".

"At last, however, we rolled into the clearing hospital which was in a large school and put down in the hall and waited to be drafted to wards. The man in the Cheshires who had looked after me in the dugout again suddenly appeared and asked if I wanted anything. It is a mystery to me how he managed to get here but I haven't seen him again and think it best not to ask. He is a splendid little fellow and has looked after me very well".

"I was eventually taken off and put to bed in a ward net to Allason and Macready was also in the same ward. We were then taken one by one into the operating theatre, the time then being about midnight. In the theatre I was planked on a makeshift table and asked if I liked chloroform. I said I objected to it strongly and promptly had a wad of cotton wool thrust over my face and, as I thought, the whole contents of a bottle of it poured on me! I protested at first and flung the wad off, but it was at once replaced and then I went off".

"An operation of sorts was performed and I woke up in the ward again, astounded to feel that my arm was still going. It is in a big iron splint and feels like nothing on earth, as also do I".

This evening our man has been in contact once more, he is being sent home, we understand for recuperation. He tells us: "Got a little to eat about 10 am and nearly all of us were then removed (Macready was left behind as he was too bad to move for the time being) and taken off on stretchers and put in motor ambulances".

"Just as we were moving off the man from the Cheshires again most mysteriously appeared and bade me goodbye and then vanished".

"The town was being shelled hard and we shivered as we drove out of the place, along a fairly good road to Poperinghe. We arrived here at 2.30 pm  and had to wait in our ambulances at the station for nearly half an hour for the train to come in. They the moved us out on to the platform, being presented with cigarettes on the way. Here we had another wait in our stretchers and I met most of the Company (Company Sergeant Major Sharpe, Sergeant Scoot etc [2]) and a terrible little Major in the RAMC [3] came up and talked to us".

"At last the train came in and as I have a good beard on and no clothes and was only wrapped in GS [4] blankets, I was, of course, mistaken for a private soldier. I was dragged off and slung into a van and left.[5] I immediately called an RAMC orderly and told him to go and get me something. He took no notice so I raised my voice in rage. One of them came across to curse me and said I might be an Officer! I said that I happened to be one and so he went off and brought the obnoxious little Major along, who started to curse me for not having said so before. I used my best language and told him it was his job to find that out and I was taken off and along to the Officers part. As they couldn't get the stretcher through the carriage window without boxes to stand on, they put me down between the next set of rails on the permanent way and went off to get boxes".

"While I was waiting there a train came along on my set of lines and stopped and whistled and blew off steam all over me. The orderlies then condescended to remove me and the train went on its way. I at last got in the train and in a bunk just above Allason!"

"We started off about 5 pm and got a whisky and soda and a sandwich to eat! The Doctor Major then came round offering chocolates etc which he said he had pinched out of the men's haversacks, packs etc.[6] We however refused them".

Thankfully there has been no attack on the 1st Battalion today. The 2nd Battalion are at Ploegsteert refitting and reorganising, occupying dugouts.


[1] Stomach wounds were often fatal but he seems to have survived the war.
[2] This may be Arthur Scoot who died of his wounds on 10th November, though he was a private, not a sergeant.
[3] Royal Army Medical Corps
[4] General Service
[5] As  with ordinary train travel on active service in a class-conscious society officers were entitled to carriages, other ranks made do with cattle trucks.
[6] Presumably the packs etc of the wounded men "slung in the van"
Posted by Martin at 07:00