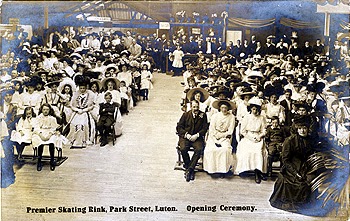 Saturday 28th November 1914: In three companies the Reserve 5th Battalion of the Bedfordshire Regiment [1] left Luton this morning for their headquarters in Bedford. There was a little send-off ceremony on Friday in the drill hall at the old skating rink in Park Street. About 300 men were on parade under Captain Batten, Captain Maior, Lieutenant Hobbs and Lieutenant New.

In the absence of the Mayor, who had hoped to be present, the Deputy Mayor (Alderman H. O. Williams) wished the men good luck, reminded them of the brave deeds that were being done at the front by the 1st and 2nd Bedfords, and said he felt sure that as Bedfordshire bull dogs they would, if called upon, maintain the splendid reputation of their county and their country.

Mr. Inwards, on behalf of the Territorial recruiting Committee, which was mainly responsible for the raising of the reserve battalion, wished the men every good wish and all good luck. The Committee, he said, hoped that the men would look upon the Recruiting Committee as a father and a mother ready to help them in every way as far as the War Office regulations would permit.

“Fear God and fear nothing else” was Mr. Inwards’ parting advice.

Captain Batten responded with a few words, and then called for cheers for the Mayor, Deputy Mayor and Mr. Inwards, which the men gave most heartily.[2]

[1] 2nd/5th Battalion, which was for home service.

[2] Captain Joseph Keith Batten, 26, son of Joseph and Katie Alice Batten of Peterborough died on 27th September 1918 and is buried in Moeuvres Communal Cemetery Extension.
Posted by Martin at 07:00