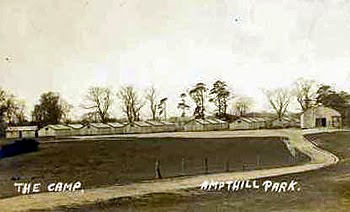 Thursday 12th November 1914: Men wishing to join the Bedfordshire Training Depot, commanded by the Duke of Bedford, should enlist at the nearest Recruiting Office, or at the Depot of the Bedfordshire Regiment at Kempston Barracks.

SEPARATION ALLOWANCE AND ALLOTMENT OF PAY

Sanction has been given by the Army Council to form a training establishment in Ampthill Park to be known as "The Bedfordshire Training Depot". This will form a unit of the Bedfordshire Regiment, Colonel the Duke of Bedford, A.D.C,[1] will be in command of the Camp, Major Stevens will be second in command, and Major Nelson, late of the Beds Regiment will be Adjutant.

On the completion of their training in Ampthill Park, the drafts, after inspection, and when found fit for foreign service, will be sent to the 3rd Battalion, Bedfordshire Regiment at Landguard and despatched from there at once abroad to join the 1st and 2nd Battalions of the Line, or any of the Service Battalions who may by then have gone to the Front.[2] Recruits on final approval will be appointed to the Beds Regiment and will be sent to the Depot at Bedford to be clothed and equipped. They will then join for training in Ampthill Park.

Six huts with ample accommodation for 20 beds each are now ready. Cook-houses, bath-houses, recreation room and canteen are in course of construction. Ampthill Park affords every facility for field training. Millbrook Rifle Range is close at hand. There will also be an open Miniature Rifle Range in the Camp, and as training will be going on during the winter a covered shooting gallery and covered drill shed. If recruits are forthcoming more huts will be built [3].

[1] Aide de Camp (to the King)
[2] These would be 6th, 7th and 8th Battalions.
[3] Between the opening and the introduction of conscription on 2nd March 1916 2,235 men were trained at the camp. Between March and March 1919 a further 8,069 men, after returning wounded from France, were put through remedial training and sent, once more to various active service units.
Posted by Martin at 07:00