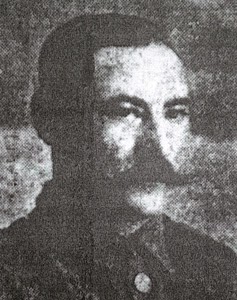 Private Sidney Whittemore from the Luton News - killed in this attack

Saturday 7th November 1914: Once more the Germans are on the move near Zandvoorde, but now it is the 1st Battalion which faces them rather than the 2nd. The adjutant of the 1st Bedfords reports to us that the Germans broke through the line held by the regiment on the battalion's left, carrying some of the Bedfords with them. The commanding officer (Major Allason) brought up reserves and assisted in driving the enemy back.

Quarter Master Sergeant Byford particularly distinguished himself and has been recommended for a Distinguished Conduct Medal (second in rank only to the Victoria Cross). He collected together forty or so men and captured a trench held by twenty one Germans, killing or capturing them all. Private Falla, recommended for the same gallantry award, ran on in advance and enfiladed the Germans to keep their heads down then blew up the garrison with grenades, whilst the remainder of his comrades were rushing the trench resulting in all the inhabitants being killed or captured.[1]

Our contact with the battalion has given us a very full report of these events. "At about 3 pm while we were sleeping in a dugout almost without any clothes on, tremendous rifle fire opened on the front line. We, however, took little notice until suddenly about a quarter of an hour later we heard men running all over our heads to the rear and there was a general confusion outside. We poked our heads out and the men running shouted that the Germans had broken through. We hurriedly got dressed and out of our hole and found a general pandemonium and men in all directions".

"I met Major Allason, who said the Germans were attacking and so darted off to collect the remnants of the Company and set about making for the trenches as we then heard that part of the line had been broken and that supports were badly wanted. Not many of the Company were, however, to be found as they had mostly been taken forward already by other fellows in the first rush forward. I collected about fifty and extended them ready to push up near the Headquarters dugout".

"The Germans were to be seen plainly in the woods all round, either prisoners or otherwise, and some were only a few yards from us on our left. The Commanding Officer suddenly appeared then to ask what was up and I pointed to the Germans in explanation as I didn't know either and he told me to try and get up to the line as quickly as possible. I had by then collected a band of men of various regiments, most of whom had been sliding back from the front and we advanced about fifty yards".

The Germans seemed all round us and we didn't quite know whether they were prisoners or not. Some were armed but the majority not and on the whole not many bullets were flying about. We, however, opened fire on those nearest to us on spec and just as I was pulling the trigger of my revolver aimed at one of the nearest (about twenty yards away) I felt a blow like a sledge hammer on my left arm".

"The revolver went off and I apparently spun round twice with the force of the blow and was caught by Sergeant Barber.[2] I do not remember that and found myself on the ground very much alive. I felt that my arm was hanging to my body and an awful weight too by a string only. I asked someone to cut it off but he felt it and said that there was plenty left yet! The whole thing was bleeding hard as the brachial artery had been severed and it felt quite numb and not very painful. I got someone to tie me up very tightly at the shoulder with my scarf and sat down on the side of a track and told the party to push on hard. As no doctor was anywhere near, after a rest I crawled and walked as best I could backwards for about twenty yards".

"The whole wood was then a scene of chaos and you could see little odd groups in different corners, having little bayonet fighting bouts. Frenchmen were in some places hanging out of a château cheering and the whole scene was most indescribable".

Despite these heroic actions the battalion, on its first full day in the Ypres sector, has lost seven officers and 140 other ranks killed and wounded and seven missing. We hope this is not an omen of future days.

This evening our man with the 1st Battalion has managed to contact us again: "I had to lie down on a bank from exhaustion and loss of blood and just as I was moving again Captain Weatherby (the Brigade Major)[3] turned up and hauled me into the General's dugout which I was practically on".

"Inside a man from the Cheshires made me comfortable in the General's blankets[4] and kept filling me up with the General's rum. I must have drunk about two bottles but feel very much better after it! This was about 4pm and the battle was raging furiously and all around us. the General then came in and was very kind and did everything for me. he then started to interview all the German prisoners who were brought in one by one".

"We learned that a big attack had been planned against our part of the line but that apparently part of the German force had refused to advance![5] Major Allason came in slightly and gave the situation and then, in spite of his wound in the shoulder, insisted on going out again. He was, however, almost immediately again wounded, this time in the thigh. Even then he wanted to go on and find out how things were going on the left but was, I believe, forcibly restrained".

"The attack has eventually died out with evening and we had by then practically regained everything that had been lost by the regiments on the right and left who had retired some distance. At about 7 pm the stretcher parties arrived and, after making rather a painful exit from the dugout on all fours and saying goodbye and thanking the General and Weatherby for all their kindness, I was put on a stretcher, given a dose of morphine by the doctor and will soon be carried back".

We are glad our contact with the battalion has survived this ordeal but lament that his wonderfully graphic pictures of life in the front line will now, inevitably, cease. In passing we should note that Kempston has suffered particularly badly in today's action with three of its sons being killed, Privates Bunyan, Cook and Emmerton, out of a total of forty eight for the battalion as a whole.

[1] Both men were awarded the DCM. Sadly Private Falla did not survive the war, he was killed in action on 28th June 1917 in a successful attack on Oppy Wood.

[2] This may be Sergeant Edwin Barber from Haynes who died of wounds on 29th June 1916.

[3] The chief of staff of the brigade and the brigadier's right hand man.

[5] This proves our speculations after the attack of 31st October, that the Germans are as tired and reduced in numbers as our own men; unless, of course, the prisoners told the British general something they thought he might like to hear.
Posted by Martin at 07:00