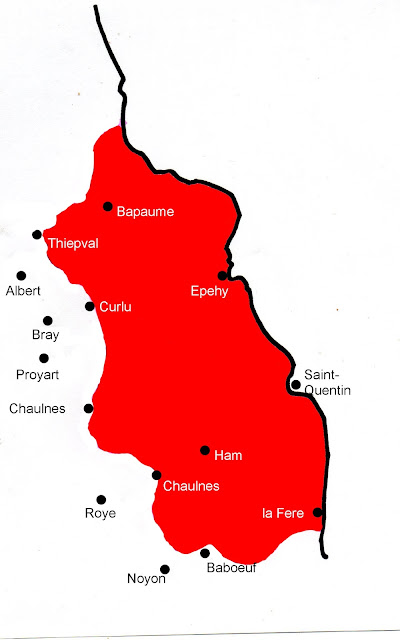 
Readers will recall that last evening my conversation with Captain Colley of 7th Battalion, Bedfordshire Regiment, was cut short by enemy action. It was with some relief this evening that I learned that it was no more than an attack on the nearby French at Guivry, driving them back, which exposed the Bedfords' left flank. At three o'clock this morning the battalion was given orders to retire to Crepigny, which was successfully carried out, the enemy being about two miles in the rear of the left flank.

At 10 a.m. they fell back again to Mont du Grandrû to safeguard the left flank. At noon the Bedfords were heavily shelled by French artillery and machine guns and forced to retire to the high ground west of Grandrû. As the adjutant remarked, the French evidently find it hard to distinguish khaki from field grey.

At three o'clock this afternoon the battalion received orders to march to Varesnes to take up a position south of the River Oise. These orders were countermanded while en-route and new orders received to counter-attack the village of Babouef. The adjutant simply stated that this counter-attack was successful and village retaken, several prisoners being taken and many enemy killed. 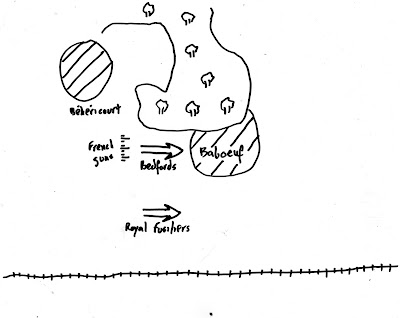 As may be imagined, your correspondent was not going to let it go at this. Pressed for more details the adjutant revealed that as the retirement to Varesnes began a gap of over a miles was opened up between the French 1st Dismounted Cavalry Division on the high ground north of Béhéricourt and 53rd Brigade on the railway line south of Baboeuf. This gap was occupied by some French artillery firing towards Babouef, with no infantry in front to protect them. So Brigadier-General Sadleir-Jackson commanding 54th Brigade, decided to attack and take the village to protect these valuable guns.

The attack went in a five o'clock this evening. The attackers were 7th Battalion, Bedfordshire Regiment, on the left immediately south of the wood east of Béhéricourt and the 11th Battalion, Royal Fusiliers with their right flank on the railway line from Noyon to Chauny. Both battalions were very tired after four days' continual movement and action and the strain of the retreat and both were about half-strength. These are not ideal conditions for an attack. Nevertheless, the adjutant sensed that above all his men wanted to get back at the enemy for the misery they have caused and that their anger and frustration would trump their weariness. So it proved. Though defended by machine guns the village was quickly taken, and half an hour ago the place was being consolidated. Ten machine guns were captured and 230 of the enemy killed or taken prisoner. The Royal Fusiliers were even weaker than the Bedfords in numbers, but they managed to take the ground south of the village with help from the 6th Battalion, Northamptonshire Regiment.

One oddity mentioned by the adjutant was a young cow. This poor creature was in the main street of Baboeuf, nevertheless it advanced with the Bedfords, though always in front of them and ended the battle quite unscathed.What a gallant little action! If these last few days had ever given rise to doubt none can doubt now the fighting spirit of Tommy Atkins.

On the old Somme battlefield, 4th Battalion, Bedfordshire Regiment (63rd (Royal Naval) Division and 483rd Field Company, Royal Engineers (2nd Division) have both been in action. 4th Bedfords took a stand at the shattered remnants of that old killing ground, High Wood. Their commanding officer briefly related that they fought to the last but, all their ammunition gone, they were obliged to withdraw to another place familiar from 1916, Thiepval, on its commanding ridge, which fell to the 7th Bedfords on 27th September 1916.


The Royal Engineers were at Auchonvillers, behind the British lines in July 1916, by noon. The sappers assisted in the defence of Auchonvillers, holding the left portion of the village, 5th Field Company holding the right, with 1st Battalion, Royal Berkshire Regiment holding the preimeter in old trenches. In the event no attack was made and the engineers are to retire to Bertrancourt tonight.

2nd Battalion, Bedfordshire Regiment spent most of the day at Buverchy watching the enemy massing for an attack. Our guns did not let this go unhampered, the commanding officer told me. But the enemy gunners were also busy, shelling the two bridges over the canal and the village of Moyencourt. About an hour ago they broke through the French, on the Bedfords' right forcing the Bedfords to retire through Moyencourt. What will happen next is very uncertain and your correspondent wishes the men the best of luck.