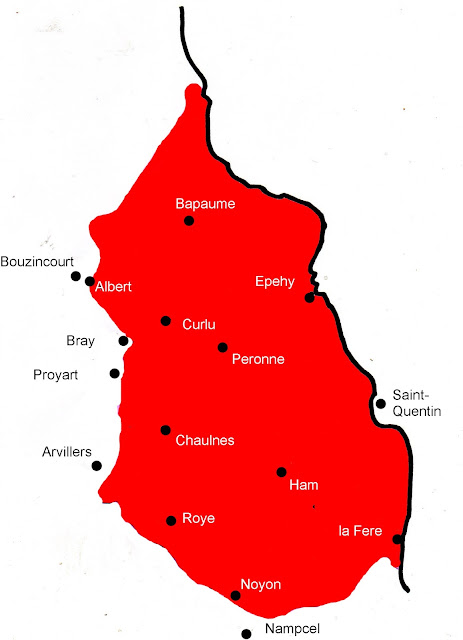 Well, it seems as if the 2nd Bedfords did have the best of luck I wished them last evening. Falling back through Moyencourt they reached Solente where, glory of glories, they found buses awaiting them. These carried them to Roye-Eglise and, after a short rest on to Arvillers where they spent the rest of the night.

About noon today they moved forward from Arvillers taking up a position along the road from Bouchoir to Rouvroy.-en-Santerre. Here they have remained, untroubled by any further enemy advance, though the Germans could be seen passing through the hamlet of le Quesnoy about a mile in front of them.

Meanwhile, 4th Battalion are still in old haunts, familiar from the winter spent on the Somme battlefield. They have been in Aveluy Wood, north of Albert, before marching to Englebelmer. Just as I spoke with Lieutenant-Colonel Collings-Wells new orders were received to advance to Bouzincourt. The unthinkable may be at hand, Albert, the railhead and hub around which all those titanic struggles of 1916 raged, is under grave threat of falling to the enemy. Albert has come to symbolise our commitment to this struggle, almost as much as Ypres. The famous golden virgin atop the basilica has been at a supine angle since October 1915, half way to falling from the tower, but never quite doing so. It is prophesied in the army that when it falls the war will end and the side that shoots it down will lose(1)

Eleswhere the 7th Battalion, after its victory at Baboeuf yesterday has been galled by having to give up its prize. The enemy was in the rear of its left flank and had nearly reached the beautiful cathedral city of Noyon. So, grumbling incessantly, the men evacuated Baboeuf early this morning and retired across the River Oise, marching eight miles before billeting for the day. Mid-afternoon saw them on the march again, reaching the village of Nampcel, and then Mesnil where they have halted for the night.

In a wire the commanding officer has sent me the casualties to date, as far as they are known:

(1) It was finally dislodged and brought crashing down by British shells in April - so much for the prophecy.
(2) Westropp Orbell Peyton Winmill, educated at Bedford School, was killed on 23rd March and has no known grave, being commemorated on the Pozieres Memorial