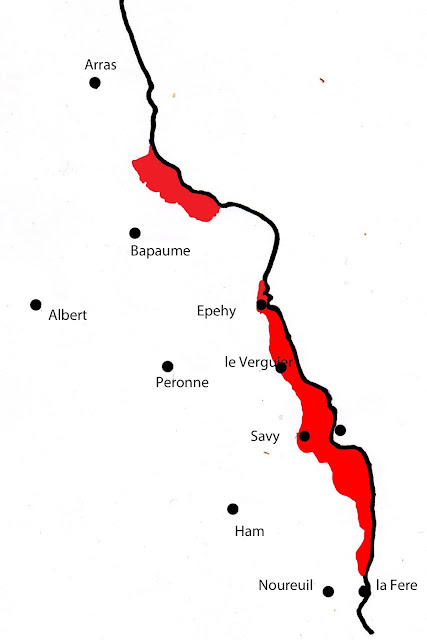 This evening your correspondent is writing his dispatch from the town of Roye, listening to artillery which at times seems far-off at others all too close. The enemy has launched his assault, predicted by many, and, as one of my colleagues observed around noon today: "All H*ll has broken loose".

This morning our little cadre of correspondents was in the village of Jussy, where we had spent the night. I was preparing to go forward to spend some time with the 2nd and 7th Battalions of our local regiment who are, by chance, close to one another in the line. I was awoken by a tremendous noise and, turning on the light and looking at my watch I saw it was 4.35. The enemy had unleashed a terrific bombardment and at that moment seemed to be throwing every shell he had from every gun he had ever made directly at yours truly. In truth the shells were landing some miles in front of the village but it seemed, though the army hastened us out of the village onto buses towards the rear, that we spent an eternity in that unhappy place. For the first time in this war I have some small inkling of what our boys in the front line must feel, but I was safe in the rear and they had to endure this tornado of steel in nothing more than hastily dug ditches.

This evening the situation is very confused but it looks as if the enemy's assault stretched some 40 miles from the town of la Fère in the south to Cambrai in the north. The sketch map above shows that we think they have broken through our defences in a small area between Epéhy and Arras and in a much longer line from the aforementioned la Fère northwards to Epéhy. This means that in some places they have managed to advance for some miles.

The 4th Battalion, Bedfordshire Regiment has, I understand, been in reserve near Cambrai and witnessed the enemy breakthrough there, without taking part in the fighting. By great good fortune I have managed to snatch a few words with the commanders of both the 2nd and 7th Battalions on very crackly lines I feared may break at any time.

The 2nd Battalion stood about six this morning, between Savy and Étreillers. When the enemy broke through the forward zone this morning, they ran into A and C Companies and managed to outflank A Company on the right, B Company going up to stabilise the position at dusk this evening. The enemy, once ensconced, however, were in too strong a position and in too great numbers to be dislodged, either side of the road from Savy to Étreillers. The battalion expects to have to fall back tonight.

The position of the 7th battalion is more complicated. Various details have been detached for duty at Rouez Camp. It is understood they have been formed into a makeshift company of six platoons. The remainder of the battalion was about half a mile away at Noureuil - directly west of la Fère. About 10.50 orders were received to move in buses to Haute Tombelle Wood which was reached at noon. at 3 pm the bulk of the battalion was ordered to occupy a trench known as Montescourt Switch as brigade reserve and as I spoke with the commanding officer they were in the middle of so doing.

Why has the enemy broken through our defences so far and so fast? It is a question many are asking here. Many of the answers seem to revolve around the weakened state of the army and the poor defences. Because of the losses in 1916 and 1917 and the fact that new recruits are not being sent fast enough from England the army is a around three-quarters strength. The battles at Ypres and Cambrai last autumn were particularly costly for us. A division should consist of three brigades each of four battalions - twelve battalion in all. However, as readers have seen, some battalions, such as the 8th Battalion, Bedfordshire Regiment, have been disbanded and sent as reinforcements elsewhere. This means that brigades have been reduced from four battalions to three. So a division now consist of nine battalions instead of twelve. In the case of the 2nd Bedfords, their brigade, 90th, lost 17th Battalion, Manchester regiment in February and the 7th Battalion's "home", 54th Brigade, saw the disbandment of the 12th Battalion, Middlesex Regiment at the same time.

In its weakened state, the army has been forced to take over more of the front line than before from the French, who are in a bad way, their casualties exceeding our own by a good (or bad) margin. Much of this line in the area of the current enemy attack had only sketchy defences and much work was required to bring them up to standard, work which was still a long way from complete this morning.

If our army is stretched and weakened, the enemy is strengthened and emboldened. Having knocked Russia out of the war last year huge numbers of soldiers, flushed with victory have been released to take part in this offensive and it is thought that our men are considerably outnumbered. The enemy have also been using new tactics. They have sent forward lightly equipped men in small units designed to find weaknesses in the line and infiltrate it, drawing the attention of the defenders and disrupting them, making them easier for the main assault to overwhelm(1).These troops have gone in very quickly immediately after tremendous but very brief bombardments, catching our men as they emerge from cover. The enemy has been further aided by the weather this morning, the air being still and the battlefields covered in a dense mist, masking the movements of the approaching troops.

The timing of this attack has, to some extent, been forced upon the Bosches. They have had to wait until the weather is likely to be favourable, and the ground firm, in order to move their artillery up briskly, something which was impossible for our army in the quagmire around Ypres last year. They are also facing something of a ticking time-bomb as estimates suggest that by the end of May there will be a quarter of a million fresh American troops in France, just raring for a crack at the enemy; so the Germans' advantage in numbers will not last long. They evidently hope to knock us out of the war before the Americans arrive.

So tonight our army is fighting a massive defensive battle, the like of which it has not had to fight since the great German thrust at Ypres in Spring 1915. The enemy may have gained ground but, knowing as your correspondent does, the resilience, patience and tenacity of Tommy Atkins, his friends Jock, taffy and Mick and his cousins from the colonies he has no doubt that this attack will be stopped.