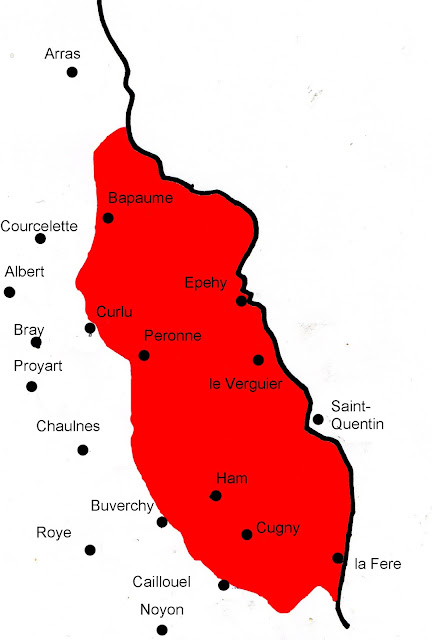 It has become clear tonight that the towns of Peronne and Bapaume have fallen to the German offensive. While serious, this may in the end help our cause. With each new town taken, each mile advanced the enemy resources become more stretched, their lines of communication and supply grow longer and more difficult to maintain. They will also have the difficult task of making any headway over the blasted desolation which is the old Somme battlefield, scoured by shell holes and lacking and roads or buildings.

A few moments conversation with the adjutant of 4th Battalion, Bedfordshire Regiment revealed that this morning they withdrew to a Royal Engineers dump north of Ytres, under heavy machine gun fire, and then on through Barastre, Beaulencourt to Bazentin-le-Petit and finally to Courcelette, on the old Somme battlefield.


The 2nd Battalion, meanwhile took up a position between the villages of Verlaines and Villette, south-west of Ham at one o'clock this morning, in support of 2nd Battalion, Royal Fusiliers, who were covering the withdrawal of 89th Brigade. Both their flanks were attacked by the enemy and forced the battalion to withdraw towards Esmery-Hallon. At this village they came under heavy machine gun fire from the right flank and they withdrew further to a canal. Their brigade, 90th, holds the west bank of this canal between Lannoy Farm Ridge and Buverchy Bridge

Meanwhile, 7th Battalion, according to their adjutant Captain Colley marched back to Caillouël in the early hours of this morning, taking up a position in a wood, north of the village, with B and D Companies in front and A Company in reserve. The French in front of the battalion were steadily pushed back by the enemy during the day. My conversation on the telephone with Captain Colley was cut shirt as deafening explosions were heard and he hastily abandoned the blower to see what was happening.

Yesterday the six platoons of details of the 7th Battalion were involved for a third day in fighting around Rouez Camp. We understand that they finally fell back on the village of Villequier-Aumont yesterday evening.

Finally, we have heard from 483rd Field Company, Royal Engineers. This unit is none other than our old friends, the Bedford based 1st East Anglian Field Company, Royal Engineers, attached to 2nd Division. Evidently they have been in the same area as 4th Bedfords. The commanding officer inforrmed me on the blower that they had been at Beaulencourt working on defences, but in the face of the enemy attack they moved back to the shattered remains of Longueval, where 1st Bedfords toiled for so long in 1916, and then to la Boisselle. He noted, laconically, that there was "great congestion at the crossroads". On reaching la Boisselle the engineers were ordered to dig in and hold a line between Ligny Thilloy and the devastation that was once High Wood. Work consisted of digging posts and marking the line with salved duckboards from the old Somme trenches. Sufficient infantry having been collected on this line, it is hoped that the sappers will be withdrawn at dawn to Miraumont whither the transport has already moved.