The Battle of Bouzincourt Ridge 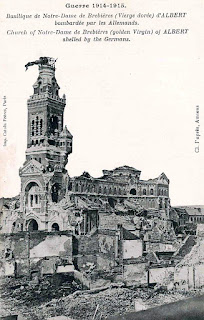 The unthinkable has indeed happened. Overnight Albert was abandoned to the enemy, for the first time in this war. The decision was made that, symbol or no, the town must be given up and the defences moved to the high ground to the east of the town as well as along the west bank of the River Ancre. Thus the ruins tonight will lie under the Kaiser's jackboot. Those we have spoken to here at Amiens, now the nerve centre of the defence against the German attack, are grimly determined that Albert will not languish long under enemy control.

Yesterday it was decided to place on man in charge of all allied armies on the Western Front - French, British, Belgian and, eventually, American. Being largely a war fought in France this command has been given to a Frenchman - Marshal Foch. He is said to be a cool-headed, intelligent man and acceptable to Field Marshal Haig. This crisis, the most pressing since the early days of 1914 and the German thrust towards Paris, will certainly test his nerve and abilities to the utmost.

Looking at the battalions of the Bedfordshire Regiment currently engaged, I have been able to contact each of them. 2nd Battalion came under attack again this morning, and began a fighting withdrawal just after midday. They held the line of a road from Arvillers to Folies and were able to stop any further German attacks in their tracks and remain in this same position this evening.


The 7th Battalion marched to Saint-Aubin this afternoon and form a reserve to 58th Division. The adjutant quoted a letter he had received from General Brecard of 1st Dismounted Cavalry Division, with whom the battalion has been working:  "During the Operations of the 24th/25th March, the 18th Division with two Brigades of Artillery, commanded by General Lee has been put under my orders".

"With regard to this, I wish to bring to your notice the splendid attitude and the brilliant bearing of the 54th Brigade and the 8th and 83rd Artillery Brigades".

"I wish to bear testimony to the perfect "camaraderie" which those General Officers and their units placed under their commands have never ceased to show, as also to the superb bearing of their troops".

"It is thanks to their splendid and dogged defence that I have been able to free on my right a situation often difficult, especially at the time of retirement on to the South Bank of the Oise on the night of 25th/26th March."

Today's main news, however, concerns the 4th Battalion, part of 63rd (Royal Naval) Division. The news is both grave and glorious. The battalion was at Bouzincourt Ridge, overlooking Albert as the town was ceded to the enemy overnight. At 7.30 this morning they attacked the railway line here, to slow the German advance. Your correspondent managed to speak with one of the senior officers - Captain FT Spicer who reported as follows: "At 6.30 pm yesterday orders were received to move at once in advance guard formation to Bouzincourt, which was reached at 8 pm. During the evening the enemy, attacking in mass formation, had gained Albert and had obtained a footing in Aveluy Wood. Small parties of the enemy had advanced on Bouzincourt but had been driven back just before we arrived".

"At midnight we moved from the village onto the high ground to the east, preparatory to an attack".

"About 7.30 a.m., in conjunction with troops on the right and left, we attacked, drove the Germans off the high ground and regained the Albert-Arras railway near Aveluy".

"At first all went well. The Germans were driven back down the Ancre valley to the railway, where for a long time the fighting was confused. After desperate fighting, during which the bayonet was freely used, the railway was reached in several places, and by bombing outwards the whole of the railway was made good".

"Meanwhile large parties of Germans debouched from Albert and counter-attacked the right flank. The arrival of some machine guns, however, saved the situation and forced the Germans to retire back into the town".

"Throughout the afternoon and evening strong counter-attacks under cover of a heavy artillery and trench mortar fire (the enemy was very quick in bringing up trench mortars) were made. These attacks followed rapidly one after the other and were only repulsed after the most bitter fighting. The enemy suffered heavily from our rifle and machine gun fire".

"During one of these attacks a trench mortar bomb fell and exploded in the shell hole from which Lieutenant-Colonel Collings-Wells was directing the operation".

This attack has come at great cost. Your correspondent spoke yesterday to the battalion's commanding officer, Lieutenant-Colonel Collings-Wells. Tonight he lies in earth, killed just as Captain Spicer relates. Major Nunneley, Second Lieutenant Macklin and Second Lieutenant Soames were also killed. Captain Plumbly is now in command of the battalion(1)

This evening has come a surprise statement. At five o'clock General Sir Hubert Gough was relieved of command of Fifth Army and will be replaced by Sir Henry Rawlinson tomorrow. This great German offensive has been aimed largely at Fifth Army and it seems as if Sir Hubert has paid the price for its success so far. Ironically, many officers to whom my colleagues and I have spoken feel that the capture of Albert will be about the limit of this advance. The enemy is not moving so quickly as he did a few days ago, nor getting so far. His troops are obviously tired, their supplies stretched and their momentum appears to be slowing. let us hope so.

(1) The action took place just south of Bouzaincourt Ridge Cemetery, where today some of the battalion, including Collings-Wells and Soames lie buried. On 23rd April The London Gazette carried the following citation for a posthumous Victoria Cross awarded to John Stanhope Collings-Wells: "For most conspicuous bravery, skilful leading and handling of his battalion in very critical situations during a withdrawal. When the rearguard was almost surrounded and in great danger of being captured, Lieutenant Colonel Collings-Wells, realising the situation, called for volunteers to remain behind and hold up the enemy whilst the remainder of the rearguard withdrew, and with his small body of volunteers held them up for one and half hours until they had expended every round of ammunition. During this time he moved freely amongst his men guiding and encouraging them, and by his great courage undoubtedly saved the situation. On a subsequent occasion, when his battalion was ordered to carry out a counter-attack, he showed the greatest bravery. Knowing that his men were extremely tired after six days' fighting, he placed himself in front and led the attack, and even when twice wounded refused to leave them but continued to lead and encourage his men until he was killed at the moment of gaining their objective. The successful results of the operations were, without doubt, due to the undaunted courage exhibited by this officer."